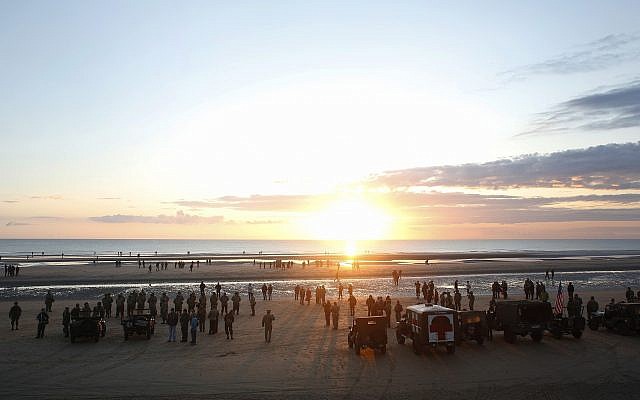 As the sun rose Thursday over the Normandy coastline where thousands of men bled and died 75 years ago, a fast-diminishing number of World War II veterans remembered D-Day, and hoped the world never forgets the sacrifices made to dismantle Nazi tyranny.

The sea of mercury blue couldn’t have been more peaceful as day broke over Omaha Beach, the first of five code-named beaches where the waters ran red the morning of June 6, 1944, when Allied forces came ashore to push the Nazis out of France.

Hundreds of people, civilians and military alike, hailing from around the world, gathered at the water’s edge, awash in emotion.

“It is sobering, surreal to be able to stand here on this beach and admire the beautiful sunrise where they came ashore, being shot at, facing unspeakable atrocities,” said 44-year-old former US paratrooper Richard Clapp, of Julian, North Carolina.

Norwegian Sigrid Flaata drove from Oslo in a 1942 restored jeep to honor the soldiers who died on D-Day. Belgian Filip Van Hecke called his journey a “small effort to pay homage.”