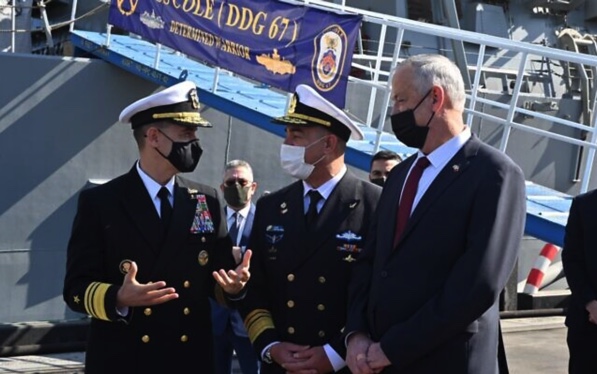 Visiting US fleet in Bahrain, Gantz hails ties while warning of threat from Iran

The defense minister’s trip came against the backdrop of peak tensions in the Gulf, with attacks by Yemen’s Iran-backed Houthi militia against the United Arab Emirates increasing in recent weeks.

“This [cooperation] is a security need of the first order in light of the growing challenges on the maritime front in particular and in the region in general,” Gantz said, speaking in front of the USS Cole, an American warship that the US said it would send to the UAE to help protect it from the ongoing Houthi attacks.

One of the key topics of conversations was ensuring safe passageway through the Red Sea and Persian Gulf, a significant source of concern for Israel in light of recent attacks on Israeli-owned vessels, allegedly by Iran, as part of a “shadow war” being waged between Israel and Iran at sea in the past few years.

“The fact that we are able to land here, in an Israeli Air Force plane, and to visit with our partners, that the head of the Israeli Navy can visit the 5th Fleet, and we can speak openly about meaningful defense issues about the security of the region, is a significant milestone,” Gantz said.