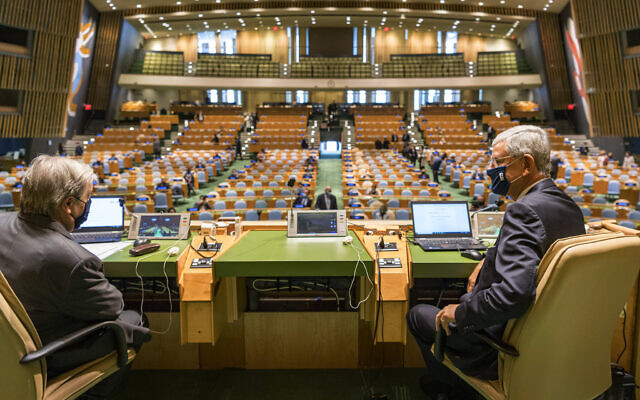 UN Condemned Israel 17 Times In 2020, Versus 6 Times For Rest Of World Combined

The United Nations General Assembly on Monday adopted two resolutions criticizing Israel, bringing 2020’s total tally to 17 resolutions against the Jewish state versus six resolutions singling out any other country, according to a tally by pro-Israel watchdog UN Watch.

Israel and activists have long slammed the UN for routinely adopting decision after decision directed against Israel, saying it exploits an overwhelming automatic majority that votes to censure Jerusalem no matter the subject.

General Assembly resolutions are nonbinding, but are seen as carrying symbolic significance.

The two motions were ratified this week after their drafts were adopted last month by the General Assembly’s Economic and Financial Committee, UN Watch said in a Monday statement.

One of them, titled “Oil slick on Lebanese shores,” condemns Israel over an alleged 2006 incident from the Second Lebanon War fought with terror group Hezbollah. It passed with 162 countries supporting it, seven opposing it and six abstaining.

The second criticized the Jewish state for allegedly exploiting the natural resources of Palestinians in the West Bank and Syrians in the Golan Heights, and passed 153 -6, with 17 abstentions.

Those votes join 15 others this year that singled out Israel for censure, while just six targeted all other countries combined: One each condemned the regimes of North Korea, Iran, Syria, and Myanmar, and two were on Crimea, which was seized in 2014 by Russia.