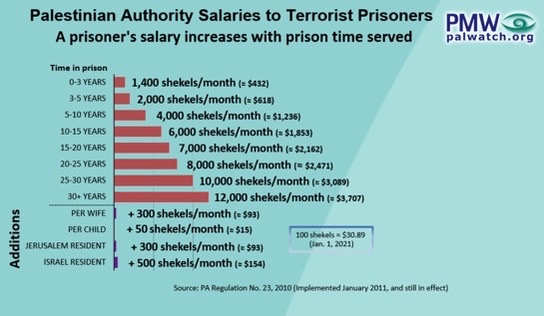 The arrest of the terrorist murderers automatically invokes the full weight of the Palestinian Authority’s 2004 Law of Prisoners and Released Prisoners and implementing regulations.

According to the law (sec. 2), all terrorists “are a fighting sector, and an inseparable part of the Palestinian society.”

Section 7 of the law, together with sections 7 and 12 of PA Government Decision Number 23 of 2010 Regarding the Regulation of Payment of the Monthly Salary to the Prisoner, guarantees the terrorists a monthly salary from the PA, that begins on the day of their arrest and increases with time spent in prison (see chart below). Section 6 of the law adds that the PA will also provide the terrorists with monthly spending money and a clothing allowance, twice a year.

The terrorists arrested this morning are members of Palestinian Islamic Jihad (PIJ), an internationally designated terror organization. Irrelevant of their terror affiliation, as part of the PA’s ‘Equal Opportunities for Terrorist Murderers’ policy, the PA pays every terrorist prisoner including those who are members of PIJ, Hamas, the Popular Front for the Liberation of Palestine and the Al-Aqsa Martyrs’ Brigades. The PA similarly does not care if the victims of terror were Israelis, Jews, or simply foreigners. The only relevant factor for entitlement to the huge PA terror reward package is that the recipient was a Palestinian terrorist arrested for his involvement in terror.