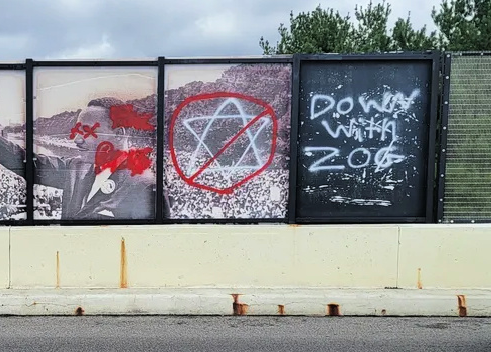 Police in Alliance, Ohio are investigating a spate of antisemitic and racist vandalism in the downtown area which they believe are connected.

All three incidents targeted Jews. The same symbol — a Star of David crossed out in a red circle — was daubed on the front of the YWCA building on E. Market St and upon another building on S. Webb Ave.

The third incident involved the words “F*** BLM” (Black Lives Matter) sprayed along Dr. Martin Luther King Jr. Viaduct, which features a series of photographic panels honoring the late US civil rights leader. Alongside that slogan was another that read “Down with ZOG” (an acronym that stands for “Zionist Occupation Government) accompanied by the same crossed-out Star of David.

“This goes against everything that we fight for every day with the YWCA and our mission,” Weimer told local news outlet The Repository.