Rabbi assaulted in Berlin — second such attack in as many weeks 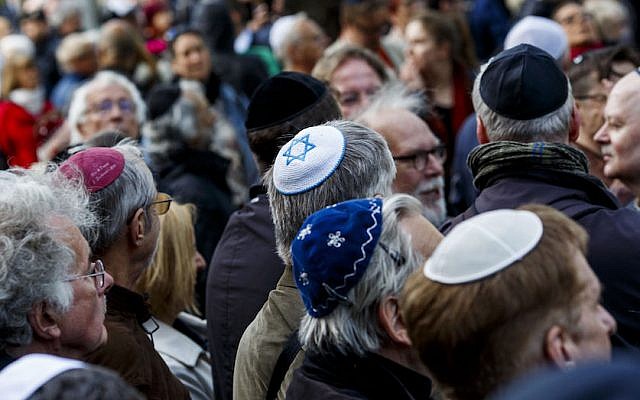 Berlin police said Thursday that they were investigating an attack on a rabbi, the second in as many weeks in the German capital.

Police said the victim, identifiable as Jewish by his attire, was pushed to the ground by two unidentified suspects while walking in the Charlottenburg neighborhood Tuesday afternoon. They said he was treated in a hospital for pain in his leg and head.

They didn’t identify the victim, but the daily Bild gave his name as Jan Aaron Hammel. The rabbi told Bild the men insulted him in Arabic before assaulting him.

Two weeks ago, another rabbi reported being spat upon and cursed at in Arabic by two men in a building in the same general neighborhood as he walked by. Rabbi Yehuda Teichtal was walking past an apartment building in the Wilmersdorf neighborhood on a Friday night when, he said. he was spat at and sworn at by two men inside the building. Teichtal, who said the two men spoke in Arabic, called in a statement for “tolerance, dialogue and training.”

Despite a rising number of anti-Semitic incidents, he said he remains “convinced most people in Berlin do not want to accept this aggression against Jews as a sad part of everyday Jewish life.”

Both attacks are being investigated as hate crimes.

A recent study found that anti-Semitism is rampant among Muslim refugees in Germany.

A week ago in Munich, a rabbi and his two sons said they were spit on and verbally attacked as they left a synagogue. A man approached the rabbi, 53, and his sons, both 19, and yelled anti-Semitic slurs as they left a central synagogue on Saturday, The Associated Press reported. A woman in a car then also began to yell at them and spit on one of the teens.

Police were looking for the two suspects, according to the report.

Last month in Potsdam, two men were arrested after an anti-Semitic assault. According to the Berliner Morgenpost newspaper, the unidentified 25-year old victim was visibly Jewish, wearing a kippa with a Star of David. “When I got off the tram at the main station, I noticed shadows behind me,” he recalled, alleging that the two men spat on him and screamed anti-Semitic threats and insults.

The incidents are the latest in a wave of racially and religiously motivated crimes against Jews to rock Germany in recent years. Germany’s domestic intelligence agency reported last month that the number of anti-Semitic acts of violence rose sharply last year alongside a further increase in those identified as far-right extremists. The BfV agency said in its annual report that incidents of anti-Semitic violence increased by 71.4 percent in 2018 to 48, from 28 the previous year.

Worries about the authorities’ inability to combat anti-Semitic violence led Germany’s anti-Semitism commissioner, Felix Klein, to state in May that he could no longer recommend that Jews wear a kippa everywhere and any time in Germany. He retracted his statement following a public outcry. In response to his statement, German tabloid newspaper Bild printed a cut-out kippa for readers to wear in solidarity with their Jewish neighbors.

In one high-profile case last year, a non-Jewish Israeli man was beaten while wearing a kippa in Berlin. The man, 21-year old Arab Israeli Adam Armush, told broadcaster Deutsche Welle that he had wanted to find out whether it was safe to walk in the street dressed as a Jew.