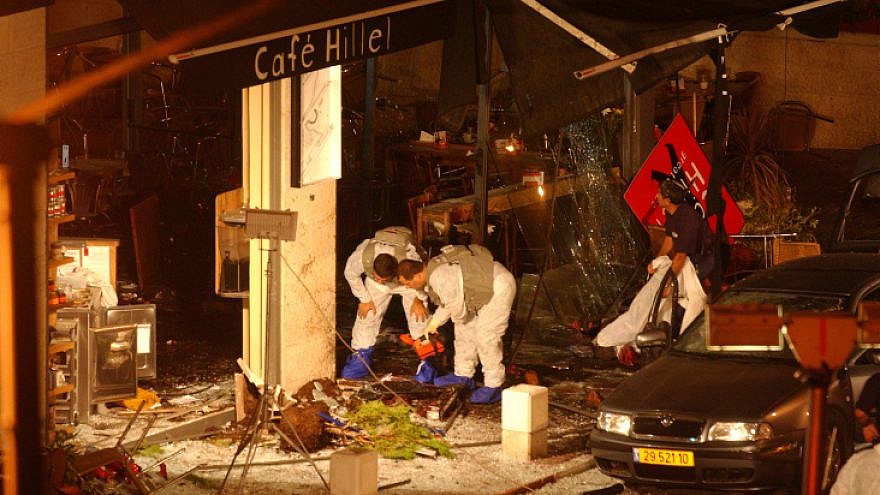 (September 9, 2019 / JNS) The Palestinian Authority has raised the “salaries” of two of the terrorists responsible for deadly twin suicide bombings in Israel in 2003, according to Israeli NGO Palestinian Media Watch (PMW).

The monthly payments were increased from NIS 6,000 ($1,703) to NIS 7,000 ($1,982) in accordance with P.A. law, according to PMW, as the two terrorists have now been imprisoned by Israel for 15 years. The two, who were arrested in July and August 2004, were the ones that manufactured the suicide vests used in the attacks.

16 people were murdered and 75 wounded in the 2003 bombings. In the first attack, at a bus stop near Tel Aviv’s Assaf Harofeh Medical Center, 9 people were killed and 18 injured, while in the second, at a coffee shop in Jerusalem just hours later, 7 people died and 57 were injured.

Among the victims of the Café Hillel bombing in Jerusalem were Dr. David Applebaum and his daughter Nava, who was to have been married the next day. The U.S.-born Applebaum was chief of the emergency room and trauma services of Jerusalem’s Shaare Zedek Medical Center and a specialist in emergency medicine. Just before the attack he participated in a symposium at which he taught terror-trauma procedures to medical professionals.

Alon Mizrachi, the security guard at Café Hillel, was killed when he tackled the suicide bomber and shoved him out of the cafe, thereby saving many lives. He was the uncle of Ziv Mizrachi, an Israeli soldier murdered by a Palestinian terrorist in November 2015.

The law guaranteeing imprisoned terrorists a monthly salary was adopted by the P.A. in 2004. P.A. leader Mahmoud Abbas has twice approved considerable salary hikes for these prisoners, and in 2006 approved regulations codifying the monthly payments and scheduled increases.

In addition to the monthly salaries, the 2004 P.A. Law of Prisoners and Released Prisoners prohibits the P.A. from signing any peace agreement that does not include the release of all Palestinian terrorists in Israeli jails, including those who actually carried out attacks.

In 18 months, according to PMW, the P.A. is scheduled to raise the salary of mass murderer Ibrahim Hamed, who is serving 54 life sentences for planning terrorist attacks which claimed the lives of 54 people.