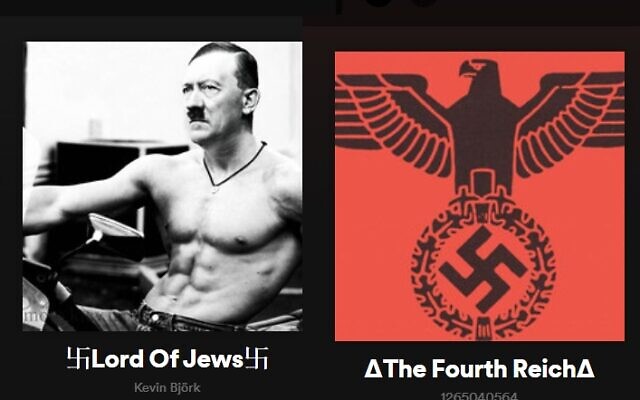 Among the anti-Semitic playlist titles are a variety of explicit calls to “gas” or kill Jews (“Gas the Jews music”; “Jews gas chamber”;”Straight gas BURN THE JEWS”; “Gas Jews”;”Kill the Jews”;”GasOnThemJ3ws”; “burn the Jews”), as well as Holocaust denial (“The Holocaust was an exaggerated game of hide and seek”; “The Holocaust was a joke”;”Rocking the soccks [sic] off holocaust victims”; “Just found out the Holocaust was fake”).

The playlists are created by users and don’t necessarily have anti-Semitic content beyond the title and art. But they are searchable and available across the platform for any of the service’s over 200 million subscribers worldwide.

“Songs to snort Anne Frank’s ashes,” reads one playlist title. “Getting gassed with Anne Frank,” says another, alongside a photo of the Jewish child Holocaust victim stamped with the words “Straight Outta Auschwitz.” (She died in the Bergen-Belsen concentration camp). Yet another playlist ridicules the young diarist’s Amsterdam hideout from Nazi persecution (“Anne Frank’s hide and seek party playlist”), while another, accompanied by a cover image of a syringe piercing a forearm, is simply called “Gas Anne Frank.”

Numerous others poke fun at the Auschwitz death camp, where over a million Jews were murdered. These publicly viewable playlists include: “Auschwitz Train Sing Along,” in reference to the mass deportations of European Jews by train to the death camp, and “Auschwitz rave party (1943 colorized),” which is accompanied by an image of Hitler wearing sunglasses and headphones. “Auschwitz mixtape” features the tagline: “Almost as lit as the Jews in 1943.”

Playlist “Hitler’s Mixtape” features a photo of a Ku Klux Klan member giving a “Heil Hitler” salute, while several other titles justify the actions of the Nazi leader (“Hitler did nothing wrong”; “Hitler was a sensitive man”; “Hitler was right”; and more).

Other playlists, including “The Fourth Reich,” feature images of swastikas, while some 17 other lists are named for the Waffen SS. The far-right hate symbol Pepe the Frog graces the cover of music lineup “The Holocaust is the best Fortnite event” and others.

“Nazi Germany marches” and other playlists appear to feature German military tunes adopted by the Waffen-SS, while other playlist titles allude to conspiracy theories about Jews (“9/11 did the jews”; and “RoThsChiLd Chillz,” with a cover photo of Hitler wearing a swastika armband).

Over 110 publicly viewable profiles are also registered on Spotify under “Adolf Hitler,” with dozens of others listed under other variations on the Nazi leader’s name.

In response to a query by The Times of Israel, Spotify said it removed hate content flagged by Germany’s Federal Department for Media Harmful to Young Persons and reviewed other complaints on a case-by-case basis.

“We take this topic very seriously. Content (artists and music) listed by the BPjM in Germany (Bundesprüfstelle für jugendgefährdende Medien/Federal Department for Media Harmful to Young Persons) is proactively removed from our service. We’re a global company, so we use the BPjM index as a global standard for these issues. Other potentially hateful or objectionable content that is flagged by users or others but not on the BPjM list is handled on a case-by-case basis,” it said in a statement.

In its policies on prohibited content, the company says: “Hate content is content that expressly and principally promotes, advocates, or incites hatred or violence against a group or individual based on characteristics, including, race, religion, gender identity, sex, ethnicity, nationality, sexual orientation, veteran status, or disability. We do not permit hate content on Spotify. When we are alerted to content that violates this standard, we will remove it from the platform.”

The Anti-Defamation League said Wednesday it was reaching out to Spotify “to press them, as we have other platforms, to adopt and enforce effective policies to combat online hate and anti-Semitism.”

“Anti-Semitic titles and mocking the Holocaust is never acceptable and a cursory search of Spotify playlists for ‘Anne Frank’ finds not only the playlist mentioned, but also playlists with troubling titles such as ‘gettin gassed with Anne Frank,’” noted ADL CEO Jonathan Greenblatt in an email.

“Some of these playlists also feature hateful imagery, which is uploaded and are not the automatically generated images created by Spotify. It is deeply disturbing that Spotify has not removed the playlist in question since being informed of its existence,” added Greenblatt.

“Furthermore, all platforms should have policies that prohibit hateful content that target protected identities such as religion, race, sexual orientation, gender, gender identity and national origin. At present, while Spotify has some policies in place to protect against abuse on the platform, it does not explicitly call out hate in these policies.”

In 2017, Spotify removed white power and neo-Nazi bands from its service after Digital Music News identified 37 white supremacist artists readily available for streaming. That decision was announced shortly after the far-right “Unite the Right” rally in Charlottesville, Virginia, which saw hundreds of neo-Nazis shout anti-Semitic slogans. One of the protesters drove into a crowd of counter-demonstrators, killing 32-year-old Heather Heyer and injuring more than two dozen others.