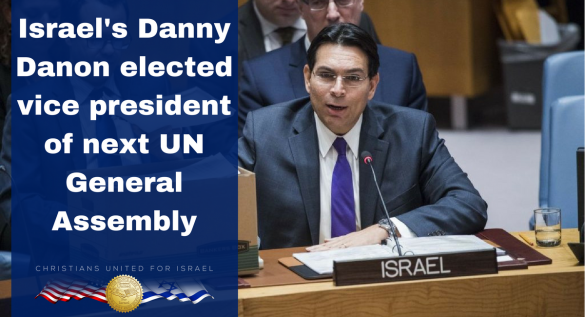 NEW YORK – Israel’s Ambassador to the United Nations Danny Danon was elected as Vice President of the Seventy-Second Session of the UN General Assembly on Wednesday.

“It is an honor to represent the State of Israel in this leadership position at the United Nations,” Danon said in a statement following the vote. “We have proven once again that Israel is ready and able to serve in significant positions in the UN and the attempts to block this progress will not succeed.”

Vice-Presidents of the GA are elected according to a pattern that ensures equitable geographical representation. Danon was chosen to the position as a representative of the Western European and Others (WEOG) regional group.

He will begin his term with the opening of the new General Assembly session in September. For a period of one year, Danon will chair meetings of the General Assembly, take part in setting the agenda of the GA and oversee the rules and decorum during its sessions.

Danon will serve alongside the new president of the GA Slovakia’s Foreign Minister Miroslav Lajčák, also elected on Wednesday.