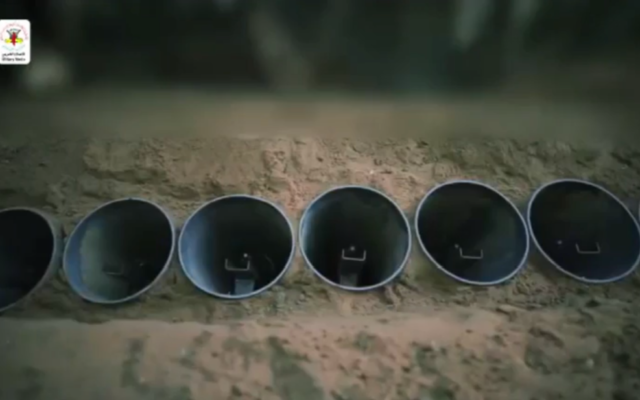 The Palestinian Islamic Jihad terror group posted a video online Wednesday showcasing its missile arsenal and vowing to continue to fire at Israeli cities as the air war between the two sides continued to escalate.

The video shows the group’s fighters preparing and launching missiles from buried launchers, then firing mortar shells toward Israel from within wooded areas. It then cuts to scenes of missiles shooting into the skies in Israel’s direction, with parts of the videos blurred to prevent IDF analysts from determining the locations of the launchers.

In a caption, the group says it is showing salvos of al-Buraq and al-Badr-3 missiles “in response to [Israel’s] wanton aggression.”

In May, Islamic Jihad said it used its new longer range rocket with a 250-kilogram warhead, known as the Badr 3, in its attacks on the coastal city of Ashkelon.

The video came as Israel’s leaders warned they would begin to target the group’s leadership if the rocket fire continued.

Over 350 rockets were fired into Israel throughout Tuesday and Wednesday in response to Israel’s killing before dawn on Tuesday of Islamic Jihad’s commander Baha Abu al-Ata in an airstrike.

Responding to the rocket fire, the IDF has carried out extensive strikes against Islamic Jihad targets throughout the Gaza Strip.

“The terrorists know we can put a target on them and we will put a target on anyone who tries to harm us. They know we can get to them in their hiding places with surgical precision,” Prime Minister Benjamin Netanyahu said at the start of a consultation with security chiefs at the headquarters of the IDF’s Southern Command on Wednesday.

“Every terrorist and terror initiator knows they have on their back a timer for the end of their life,” he said.

Bennett also said the decision on how long the fighting would last depended on terror groups in Gaza.

“It’s their decision whether to drag the citizens of Gaza and their own residents into this. We hope not but they’ll bear responsibility for the decisions they make in the coming hours,” he said.

According to the IDF, the Iron Dome air defense system intercepted the vast majority of the incoming projectiles heading toward populated areas — 90 percent as of Wednesday morning. Some 50% of Gaza-launched rockets have fallen in open, unpopulated areas, the army said.

In total, at least 24 Palestinians in the Gaza Strip have been killed and 69 wounded since early Tuesday morning, the Hamas-run Gaza health ministry said.

Islamic Jihad and other terror groups in the Strip have publicly acknowledged that at least 12 of those killed were their members, though Israeli officials have indicated that the number is far higher. The Hamas-run health ministry in Gaza said three of the dead were children.

There was no statement from either side on a ceasefire, though Egyptian and UN officials on Tuesday night said they were pushing for one.

Egyptian officials, who spoke on condition of anonymity, said Cairo was attempting to de-escalate tensions between Israel and the terror groups. The officials added that the Egyptian General Intelligence Service stepped up communications and “opened channels” with the US and the European Union.