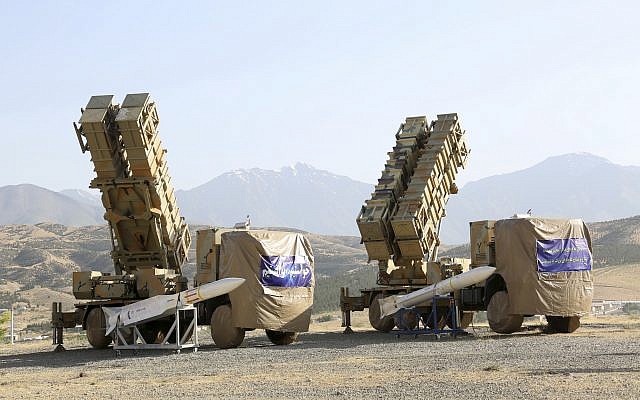 Iran unveiled a locally developed advanced missile defense system on Sunday that it says is capable of destroying fighter jets and enemy drones from as far as 120 kilometers (75 miles) away, state media reported.

The weapons system referred to as the “Khordad 15” was displayed in a ceremony attended by Iranian Defense Minister Amir Hatami in Tehran, during which he said that it could detect targets as far away as 150 kilometers (93 miles).

“It can also trace stealth targets in areas 85 km (53 miles) in distance, and destroy them at a distance of 45 km (28 miles),” the semi-official Fars news agency quoted Hatami as saying.

He added that the system is capable of destroying six targets simultaneously and can be set up for operation within five minutes.

The system uses locally made missiles that resemble the HAWK missiles that the US once sold to the shah and later delivered to the Islamic Republic in the 1980s Iran-Contra scandal.

The minister asserted that the Khordad 15 and other such systems were for use in defending Iran from foreign threats.

Iran has worked in recent years to build its own weapons locally, rather than relying on foreign actors.