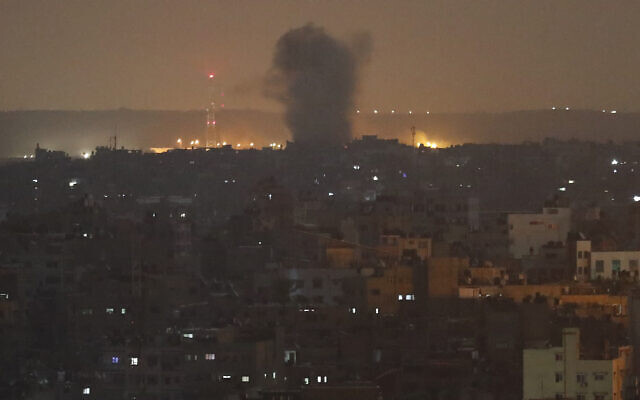 The Israel Defense Forces said it launched fresh airstrikes on Palestinian Islamic Jihad targets in the Gaza Strip in the predawn hours of Friday morning, in response to four rocket attacks from the coastal enclave which violated a ceasefire agreement announced the day before.

Palestinian media reported that Israeli drones and fighter jets conducted strikes on PIJ facilities in the cities of Khan Younis and Rafah in the southern Strip.

“We are currently striking Islamic Jihad terror targets in Gaza. This comes after rockets were indiscriminately fired from Gaza at Israeli civilians today,” the IDF said in a statement.

The military said it attacked a PIJ facility used to manufacture rocket parts in Rafah and a brigade headquarters in Khan Younis “in which there were several offices belonging to PIJ commanders.”

“The IDF views with great severity the violation of the ceasefire and the firing of rockets at Israel. It is at high alert and will continue to act, as necessary, against attempts to harm Israeli citizens,” the army said.

Palestinian media reported that at least two people were injured in the Israeli strikes on PIJ posts.

There were no reports of injuries or damage caused by shrapnel from the intercepted rockets.

Earlier in the day three separate volleys of rockets were fired at Israel from Gaza, puncturing a tense calm and leading to fears of a resumption of violence. In one case pieces of a projectile landed in the yard of a daycare in Netivot, but there were no injuries. Throughout Thursday, Israel abided by the Egypt- and UN-brokered ceasefire and refrained from launching retaliatory strikes, despite public pressure to do so.

It was not immediately clear who fired the rockets. Some members of the PIJ were reportedly opposed to the truce announced early Thursday morning, leading to speculation by analysts that they would fire rockets at Israel in order to derail it.

Following the Thursday night rocket attack, shortly after 10 p.m., the southern city of Ashkelon said it was canceling schools for Friday, following the lead of the Israeli communities closest to the Gaza border which made a similar announcement earlier in the evening in light of the multiple breaches of the ceasefire agreement. Early Friday, the city of Netivot also said it was closing its schools.

From predawn Tuesday to Thursday morning, Israel and the PIJ fought a 48-hour battle in which over 450 rockets and mortar shells were fired at Israel from Gaza, and the IDF responded with dozens of airstrikes on PIJ facilities and on the terror cells as they were firing and preparing to launch rockets. Palestinian sources said 34 Gazans were killed, many of them from Islamic Jihad. Israel said the overwhelming majority of the fatalities were terrorists. Fifty-eight Israelis were lightly and moderately injured or treated for shock.

Most of the rockets from Gaza either landed in open fields or were intercepted by Israeli air defenses. Some struck homes, businesses and streets, causing injuries and significant property damage. Dozens of people were also hurt as they fell running to bomb shelters.

In response to the attacks, the Israeli military conducted dozens of strikes on Islamic Jihad bases and weapons facilities, as well as rocket-launching teams throughout the Strip, killing 25 terrorists, according to the IDF.

The flare-up started after an Israeli missile killed Baha Abu al-Ata, a senior commander in the Palestinian Islamic Jihad terror group, whom Israel said was the “prime instigator” of terrorism from Gaza over the past year.

Maj. Gen. Gen. Herzi Halevi, the head of the Israeli military’s Southern Command, reportedly warned Gaza-area residents Thursday that the rocket fire might continue even with the ceasefire agreement in place.

“It’s true to now that the escalation is behind us, but the fire can resume,” he was quoted saying by Channel 12 news.

The general said the IDF would also be working to thwart these attacks. “If we identity launch efforts, we will strike the cells,” Halevi said.

Other Israeli leaders have warned they would not hesitate to return to battle.

“Our fighters in all of our military units still have their fingers on the trigger and they work in accordance with a fully integrated military system,” the Al-Quds Brigade said in a statement, unveiling what it said was a new rocket used in the fighting — the Buraq 120.On Thursday the IDF said schools and businesses were allowed to reopen and limits on large gatherings were removed in the Gaza periphery and nearby Lachish region.

In addition, Israel reopened all land crossings to the Gaza Strip and resumed allowing Palestinian fisherman to work up to 15 nautical miles from the shore, following a security assessment, an Israeli official said Thursday.

Touring an Iron Dome command center Thursday, Prime Minister Benjamin Netanyahu said the fighting had ended and Israel had sent a deterrent message to “our enemies.”