Defense minister: In next war, Israel will face fighting in north and south 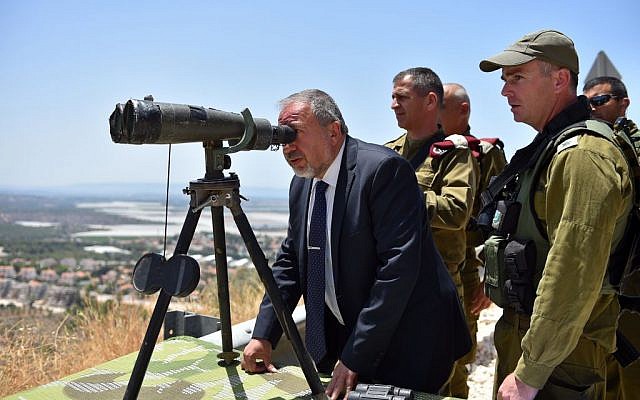 Defense Minister Avigdor Liberman on Tuesday said the next war in Israel will see the Israel Defense Forces facing both a unified Syrian and Lebanese foe and another front in the Gaza Strip.

He also declared Tuesday that the Lebanese army has been fully integrated with Hezbollah and now operates under the terror group’s command.

“When the next campaign begins, and it doesn’t matter where it begins, in the north or the south, it will immediately become a two-front campaign. There is no longer a single front, and that is our basic assumption. We are preparing the army for that,” said Liberman, addressing the Defense Ministry in Tel Aviv during an event for soldiers to mark the ongoing Sukkot festival.

The defense minister said that Israel’s northern front now included both Lebanon and Syria, where he predicted fighting against the Jewish state would be coordinated.

“The new reality also prepares new challenges for us. If once we spoke about the Lebanese front — there is no longer such a front. There is the northern front. In any development there may be, it will be one front, Syria and Lebanon together, Hezbollah, the Assad regime and all the Assad regime supporters.”

Although Israeli and Syrian forces clashed in Lebanon during the 1982 First Lebanon War, the two countries have not fought across their common border since the 1973 Yom Kippur War.

Israel was working to prevent a war, but the situation was “fragile” and a confrontation could erupt at any moment, said Liberman.

“All of our effort is to prevent the next war, but in the ‘new’ Middle East the assessments that were familiar in the past, such as low likelihood [of war], are simply irrelevant assessments,” said Liberman. “The reality is fragile; it can happen from one moment to another, from today to tomorrow.”

“It’s all based on the fact that we have to prepare for a serious battle, and there is no battle without tremendous firepower,” the defense minister said. “My personal basic view is that ‘those who want peace should prepare for war.’ I hope that our enemies on the other side will think well about each step they take against Israel, in order that we not be required to demonstrate the full force and abilities of the IDF.”