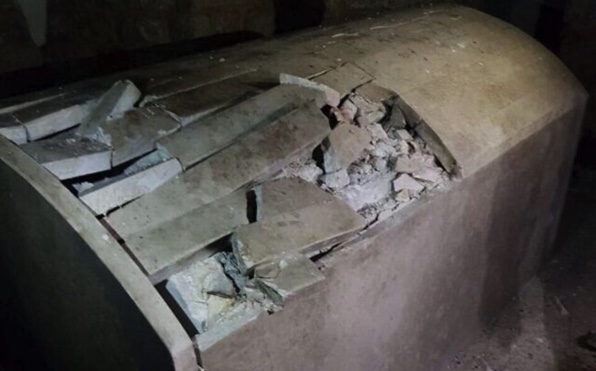 Prime Minister Naftali Bennett joined the condemnation on Sunday of the overnight arson and vandalism of Joseph’s Tomb near the West Bank city of Nablus, saying he was appalled by the images of the damage to the shrine.

“During the night Palestinians destroyed Joseph’s Tomb. Dozens of Palestinian rioters in a campaign of destruction simply violated a holy place for us, the Jews,” Bennett said at the start of the cabinet meeting.

“They broke the tombstone on the grave, set fire to rooms in the compound — I saw the pictures and was shocked,” he said.

“We will not abide such an assault on a place that is holy to us — on the eve of Passover — and we will get to the rioters,” he said. “And of course we will make sure to rebuild what they destroyed, as we always do.”

Around 100 Palestinians broke into the site overnight, rioted and set it ablaze, before they were dispersed by Palestinian security forces and smashed objects inside, Israel Defense Forces spokesman Brig. Gen. Ran Kochav said.