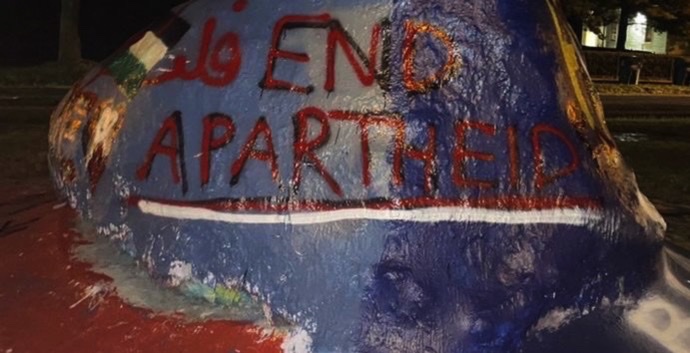 Students at the University of Michigan last Thursday erected an “apartheid wall” on campus and led an anti-Israel protest in front of it.

Organized by Students for Allied Freedom and Equality (SAFE), the demonstration coincided with observance of the Jewish New Year.

“It is an apartheid wall and actively contributes to the systems of apartheid, ethnic cleansing, and forced displacement that harms Palestinians every single day,” a student, who declined to reveal her identity, told The Michigan Daily. “The wall separates family members from one another, children from their schools, men and women from their jobs, and sick people from the nearest hospitals.”

Others, one of whom made a sign that said “No Justice, No Peace,” accused the Israeli government of aiming to harm American pro-Palestinian activists, denounced Canary Mission, an antisemitism watchdog, and criticized the university for refusing to embrace the boycott, divestment, and sanctions (BDS) movement.