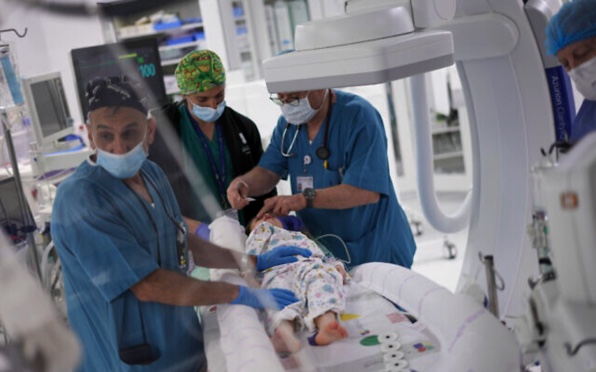 Five-year-old Karina Andreiko was not hurt in the war in Ukraine. In some ways, she was saved because of it.

Stressed by the long search for why her daughter was smaller than other kids — and by the war with Russia — Karina’s mother last month sought help from an Israeli field hospital about five kilometers (three miles) from the family’s home near the Ukrainian-Polish border. A doctor there listened to Karina’s heart, heard a murmur and conducted an ultrasound. The diagnosis was a congenital defect between Karina’s heart chambers, treatable with a simple procedure available in Israel, but not in Ukraine, doctors said.

Save a Child’s Heart, an Israeli nonprofit, agreed to transport Karina to Wolfson Medical Center in Holon, near Tel Aviv, for treatment. Passports were secured, a plan was made, and on Monday, two weeks after Karina’s mother approached the field hospital, doctors in Israel treated Karina with the catheterization expected to allow her to live a normal life.

“I am happy that I came to Israel for my child to have an operation here,” said Karina’s mother, Iryna Andreiko. “On the one hand, I am very worried about her, but I think everything will be fine.”

Fearful of Russia, Israel has tried to strike a cautious posture toward the Russian invasion of Ukraine, even as the West lined up against President Vladimir Putin.