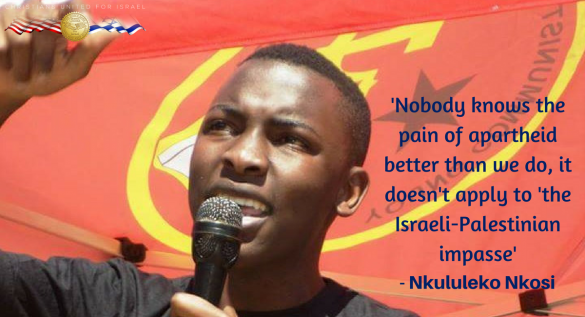 Comparing Israel to apartheid South Africa is all the rage again. A United Nations agency recently published (and the United Nations secretary general rejected) a report accusing the Jewish state of having “established an apartheid regime that dominates the Palestinian people as a whole.” Campuses around the world are currently marking Israel Apartheid Week to “raise awareness of Israel’s settler-colonial project and apartheid system.”

The question of whether today’s Israel is akin to the old South Africa was forcefully rejected by former anti-apartheid activist Benjamin Pogrund in an op-ed in The New York Times last week, once more triggering passionate discussion over the question.

But in recent months, a growing number of young black South Africans — including members of the ANC’s youth division — have visited Israel and now forcefully reject the parallels drawn between the racist regime under which their parents suffered and the current reality for Palestinian Arabs — in Israel, the West Bank and Gaza. Prominent among them is Nkululeko Nkosi, a 23-year-old member of the ANC Youth League.

“Put simply, because nobody knows the pain of apartheid better than we do, we are able to guide the rest of the world on when to describe a situation using that term and when to avoid doing so.”

Nkosi, who hails from Kathlehong township in Johannesburg and recently obtained an undergraduate degree in law, went on to argue that apartheid was about race, while the Israeli-Palestinian conflict encompasses both religious and territorial disputes.