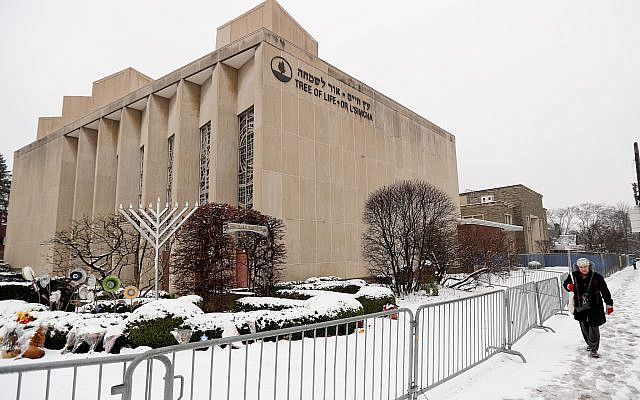 PITTSBURGH (AP) — Leaders of the Pittsburgh synagogue where worshippers were fatally shot last year want to rebuild and renovate the building, turning it into what they hope will be a “center for Jewish life in the United States” and a symbol against hatred.

On Friday, they outlined their vision for the Tree of Life building, where three congregations — Tree of Life, Dor Hadash and New Light — had gathered on Oct. 27, 2018. A gunman opened fire, killing 11 people and wounding seven.

The building in the city’s Squirrel Hill neighborhood has not reopened since the shooting, the deadliest attack on Jews in US history. Tree of Life leaders now envision a rebuilt space that includes places for worship; memorial, education and social events; classrooms and exhibitions. The mission is to fight anti-Semitism and all forms of discrimination.

“There was never any doubt that we would go back to the site,” Tree of Life Executive Director Barb Feige said. “The congregation is a community. It survives without its building, but is committed to going back to that location.”

There have been conceptual discussions about the changes to the building, which is being cleaned out, said Tree of Life president Sam Schachner. Some donations have come in that will be used for the project, and the congregation will engage in a vigorous fundraising campaign, he said. No architectural plans have been drawn up, and no construction work has yet taken place.

The building was in need of extensive and costly repairs before the shooting, Feige said. The rebuilding now extends initial plans Tree of Life had to expand cooperation and collaboration among the three congregations and with the community, she said.

Robert Bowers, 47, a truck driver from Baldwin, Pennsylvania, is charged in the attack. Investigators say Bowers used an AR-15 rifle and other weapons, and that he criticized a Jewish charity on social media before the massacre, claiming the immigrant aid society “likes to bring invaders that kill our people.” Police said Bowers also expressed hatred of Jews during and after the rampage.

Federal prosecutors are seeking the death penalty. Bowers’ lawyers said this week that the case would be over by now if the prosecutors had accepted his offer to plead guilty in return for a sentence of life in prison without parole.

The government’s decision to seek the death penalty disappointed some of the people most affected by the massacre, including members of Dor Hadash. The rabbi of New Light Congregation, which had three members slain in the attack, also expressed his opposition to a death sentence. Tree Of Life has said it is confident justice will be served.

That collaboration likely will include the Holocaust Center of Pittsburgh’s moving into the building, where neighboring Chatham University also hopes to share space, Feige said.

“We are poised to become an incredible center for Jewish life in the United States,” Tree of Life’s Rabbi Jeffrey Myers, who was leading Shabbat services when the shooting started, said in a statement. “When we reopen, and we most certainly will, I want the entire world to say, ‘Wow, look at what they have done.’ To do anything less disrespects the memory of our 11 martyrs.”

“Regardless where that is located, whether it is our site or not, we will obviously include in our plan a memorial, if not the memorial, to the 11 souls that were lost,” she said. She called the eight men and three women killed “stalwarts of the three congregations.”

“I think part of our desire is to honor them and their commitment,” she added. “Is it sort of the-bad-guys-win-if-we-don’t-go-back? There is a little bit of that.”

The next steps include hiring a strategic planning consultant well versed in the Jewish community and in building collaborative and space-sharing plans.

“It’s a bit of a unicorn in the skills set, but hopefully we can find someone who can lead us,” she said.

Chuck Diamond, Tree of Life’s former rabbi, said returning to the building will not only provide a stand against hatred, but also hope for Pittsburgh and other communities affected by mass shootings.

“When people pass by that corner, you can’t help but think of what happened and the poor souls who lost their lives. And it’s sad,” Diamond said. “To rebuild, inspired by those wonderful people and their memories, and by honoring their memories, it sends a positive message to the entire world.”

He spent 10 years in the building, which has been the scene of many joyous occasions — weddings, bar and bat mitzvahs, parties and baby-naming ceremonies.

“That is what it should be remembered for, all the wonderful things,” Diamond said. “The community would like to see it as a center for Jewish life, a symbol that nothing is going to keep us down, like we have been doing for centuries.”