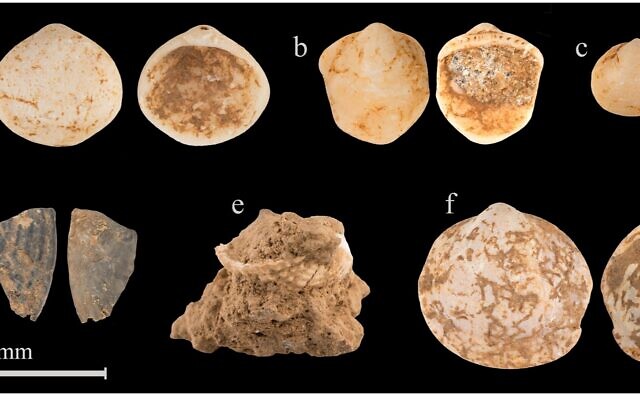 Sometime around 160,000 to 120,000 years ago, early man began to string together painted shells and display them, according to a new international, interdisciplinary study published in the open-sourced PLOS One journal this week.

Until now, the earliest potential example of string use was in the form of fibers found on an eagle talon recently found in Krapina, Croatia, dating to 130,000 years ago.

Early humans migrated out of Africa — potentially during a Levantine Ice Age — circa 200,000 years ago. With their arrival to the Israeli caves, also came their shell collections. In the new study, the authors suggest that the clam shells — which were abundantly found on the beaches not far from the Carmel Mountain caves — were chosen precisely because of their easily strung holes.

“Our data suggest that sometime within the time range of 160 and 120 ka BP the technology for making strings emerged, and that this technology boosted the collection of naturally perforated shells for display, a practice common to this day,” write the authors in the article, “On holes and strings: Earliest displays of human adornment in the Middle Palaeolithic.”