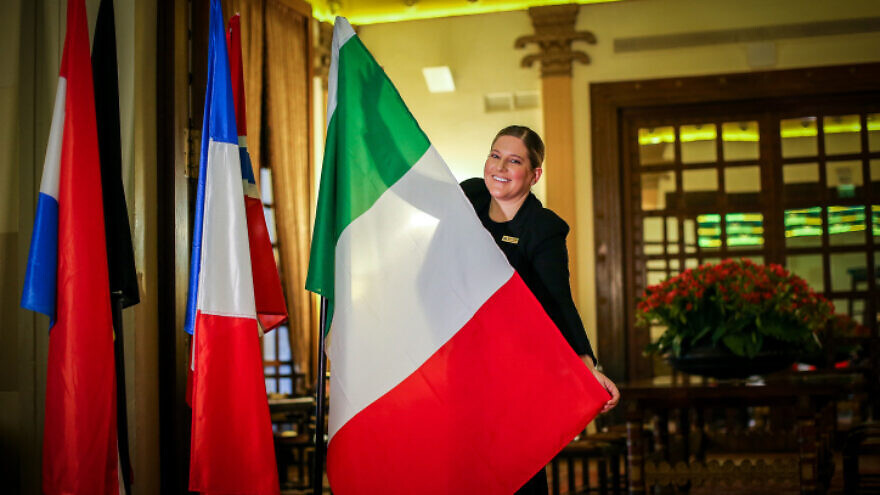 (January 20, 2020 / JNS) Israeli President Reuven Rivlin and the Yad Vashem Holocaust memorial and museum and are hosting the 5th World Holocaust Forum in Jerusalem on Thursday. This year’s event, titled, “Remembering the Holocaust: Fighting Antisemitism,” commemorates 75 years since the 1945 liberation of the Auschwitz-Birkenau concentration camp. According to Rivlin, the purpose of the gathering is “to think about how to pass on Holocaust remembrance to generations who will live in a world without survivors, and what steps we must take to ensure the safety and security of Jews, all around the world.”

The logistics and coordination for the arrival of so many foreign dignitaries at one time required special preparation, including closing off one terminal of Ben-Gurion International Airport to all other air traffic. The King David Hotel was completely booked by world leaders including French President Macron and Prince Charles, forcing the American delegation led by Vice President Pence and House Speaker Nancy Pelosi to stay at the Crowne Plaza Hotel and Russian President Putin and his delegation to stay at the David Citadel Hotel.

Israeli Foreign Minister Israel Katz, whose ministry is responsible for all the arrangements related to the leaders’ visits, told JNS that “this is the largest diplomatic event in the state’s history,” adding that “the Foreign Ministry is prepared.”

A child of Holocaust survivors himself, Katz said, “I see it as a moral obligation to fight against all anti-Semitism, and the gathering will focus on the importance of both remembering the Holocaust and combating anti-Semitism wherever it rears its head.”

“This World Holocaust Forum is taking place against the background of a rise in hateful and violent expressions of anti-Semitism. This alarming situation makes this event more crucial and relevant than ever and strengthens the importance of efforts to educate about the dangers of anti-Semitism, racism and xenophobia, and foster Holocaust commemoration and research worldwide,” said Shalev.

This specific gathering, he continued, “Provides an opportunity for all of these heads of state to stand united and clearly declare their commitment to remembering the Holocaust, to engage in true introspection about the origins and events of the Holocaust, and ultimately to fight modern-day expressions of anti-Semitism and other forms of hatred.”

World Holocaust Forum Foundation Founder and President Moshe Kantor echoed Shalev’s remarks, declaring that “Jewish life is once again under threat in Europe. It is under threat from the day-to-day harassment and attacks, on the streets, in schools, at universities, online and even in [Jews’] own homes. It has become so bad that the overwhelming majority of Jews in Europe no longer feel safe.”

Anti-Semitism, said Kantor, “is a hatred that knows no boundaries and has been adopted by multiple ideologies. Jews are relentlessly attacked by the left, the right and the mainstream. This is another pivotal point in history where the leaders of the world have to stand up and act. Words are not enough.”

This gathering of world leaders, said Kantor, will have a specific goal of creating an “action plan to aggressively fight back against anti-Semitism.”