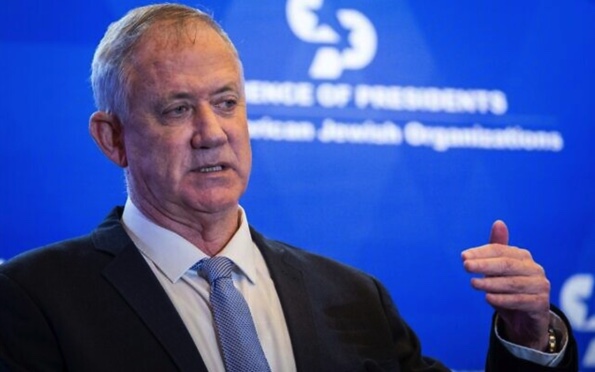 Defense Minister Benny Gantz attempted to divert part of the world’s attention from Russia’s invasion of Ukraine to what he said was another threat to world peace, seeking to rally the international community against Iran amid speculation that a new pact over its nuclear program may be in the offing.

Gantz called in a Monday Facebook post for the world to “act against Iranian aggression,” vowing that Israel would continue to act regardless of any deal reached by world powers with Iran.

“Today, we must reiterate the warning that Iranian aggression, whether it emanates from Iranian territory or through Iranian proxies, is a threat to global peace and to regional stability, as well as a threat to the State of Israel,” Gantz wrote.

Gantz recalled previous disclosures he had made of malign Iranian activity and those behind it, including Sunday when the IDF claimed it had intercepted an attempt to transfer armed UAVs from Iran to Gaza.

“It is during this important time, when a nuclear agreement is being negotiated in Vienna, that we must remember: Today Iranian aggression is conducted without [it holding nuclear weapons]. If Iran reaches a nuclear threshold, it will become even more dangerous to world peace,” Gantz said.