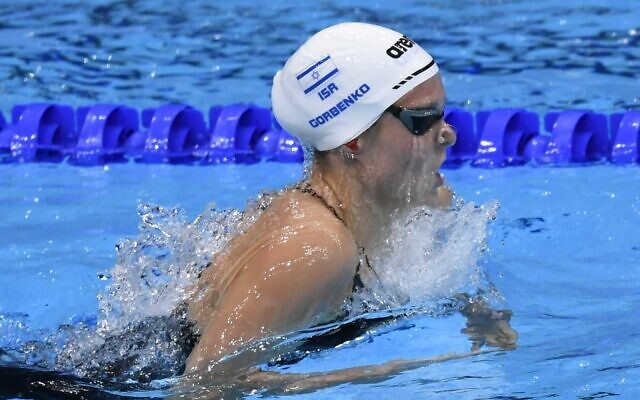 Israeli swimmer Anastasia Gorbenko made history and set a national record in the 100-meter backstroke Monday, on her way to clinching a chance to compete for an Olympic medal in the event. She also qualified for the semifinals in the 200-meter individual medley — her strongest event.

Gorbenko, 17, raced in with a time of 59.30 seconds, enough to clinch fourth place in her heat, and eighth place among all 16 swimmers competing in the event, good enough to put her in Tuesday’s final in an event that isn’t even her strongest.

Only two Israeli swimmers before her have ever reached an Olympic final: Eitan Orbach in Sydney 2000 (who finished in 8th place) and Yaakov Toumarkin in London 2012 (7th place). Gorbenko is the first woman to reach that stage.

She swam behind American Regan Smith, who set a new Olympic record with a time of 57.86 seconds.

In May, Gorbenko became the first Israeli woman to break the 1-minute mark, setting a new record of 59.96 at the European Championships in Budapest by breaking her own record set two years earlier of 1:00.58.