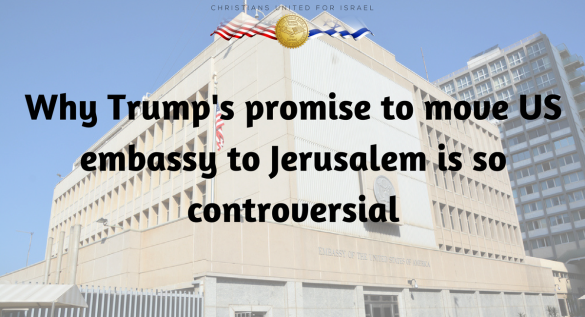 Despite President Trump’s campaign promise to move the U.S. embassy in Israel from Tel Aviv to Jerusalem, it doesn’t seem as though his upcoming foreign trip will be the time for him to announce the relocation.

Like presidents before him, Trump expressed his support for Israel while in campaign mode and said the embassy should be moved to “the eternal capital for the Jewish people, Jerusalem.”

Trump will embark on his first foreign trip on Saturday, during which he is expected to meet with Israeli President Reuven Rivlin, Prime Minister Benjamin Netanyahu and Palestinian President Mahmoud Abbas during his trip.

A senior White House official told Bloomberg earlier this week that Trump would not be using the trip to announce a change in embassy locations.

“We don’t think it would be wise to do it at the time,” the official said, adding that the administration would still eventually like the embassy to move.

Some in Trump’s administration have promoted the move while others have expressed hesitation. Still others have predicted that moving the embassy would solidify Trump’s “immortality” and place in history.

Read on to find out why the decision is so contentious — and why it hasn’t been accomplished yet.

The international community, including the U.S., largely does not recognize Jerusalem as the capital of Israel as it is claimed by both Palestinians and Israelis. Like other countries, the U.S. keeps its embassy in Tel Aviv, approximately an hour away.

Should the U.S. move the embassy, it could cause “significant harm to the U.S. credibility as a mediator” for peace talks between Israelis and Palestinians, said Dylan Williams, vice president of government affairs for J Street, a left-leaning pro-Israel advocacy organization.