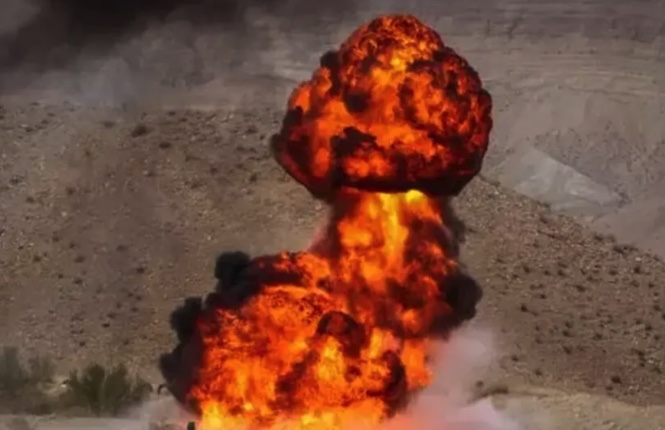 Iran has published and distributed a video of rockets and drones being used to attack Dimona in the Negev Desert. It says the attack took place during the recent 17th Great Prophet drill with the Islamic Revolutionary Guard Corps and the IRGC Air Force.
Tehran says it “simulated a missile and drone attack on the Dimona nuclear center using 16 ballistic missiles and five suicide drones, successfully,” according to its semi-official Fars News Agency. The Jerusalem Post reported on the initial videos on Saturday. Iran has now doubled down with its own reports, bragging about its abilities.
This matters more than in the past because Iran is threatening to attack the Dimona nuclear facility, a dangerous escalation in rhetoric. It is also tied to Tehran revealing aspects of its drone program and new technology.
The video was published by Fars and Tasnim New Agency, main Iranian media outlets linked to the government and the IRGC. This means the video is a purposeful attempt by Iran to threaten Israel, which, of course, isn’t exactly new. Tehran threatens Israel everyday with various forms of destruction; it continually has to come up with new threats.
However, the decision by Iran to test long-range ballistic missiles and unveil a new multiple drone launcher while splicing that with a digital mock-up of Dimona appears to be a new level of Iranian aggressive threats.
Read More: The Jerusalem Post