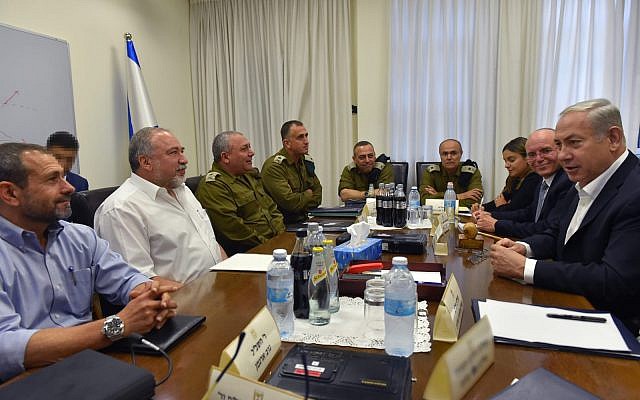 A leading consideration as top ministers deliberated Thursday how to respond to ongoing rocket attacks from the Gaza Strip was the need to focus on the northern border with Syria and the Iranian threat emanating from there, Channel 10 news reported Friday.

According to the TV report, ministers at the emergency security cabinet meeting were informed that the Hamas terror group had made several appeals for a ceasefire through mediator Egypt as well as via the UN.

Unnamed ministers present at the meeting told the broadcaster that Prime Minister Benjamin Netanyahu pushed for an end to the latest round of fighting, rather than a widening of Israeli operations against Hamas and other Gaza terror groups.

Energy Minister Yuval Steinitz, a top ally of Netanyahu, reportedly championed that same line, telling ministers a war in Gaza would not serve Israeli interests, as Jerusalem now needed to focus on the chief threat to national security — Iran’s attempts to entrench itself in Syria along the Israeli border.

Israel has repeatedly vowed to prevent Iran establishing a permanent presence in Syria and Lebanon and has carried out dozens of air strikes against Iran-backed forces and attempts to smuggle advanced weapons to Hezbollah.

Channel 10 reported that IDF officials at the meeting agreed that Israel could content itself with the actions it had taken so far and not widen the campaign, noting that Hamas had suffered serious damage through Israeli strikes on key sites.

Most ministers agreed with Netanyahu and Steinitz’s line of reasoning, the report said.

READ MORE at The Times of Israel.