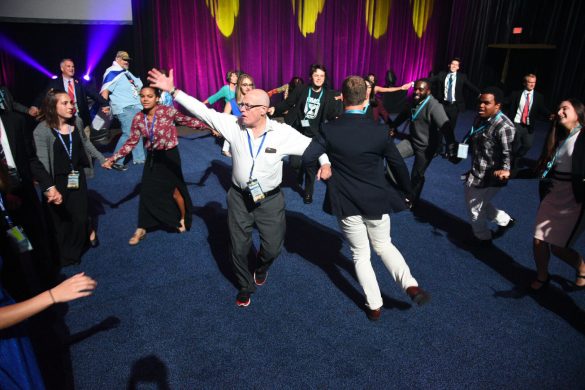 The Bible is filled with stories of miracles. But if there’s one major takeaway from the 2017 Christians United for Israel (CUFI) Summit, it’s that miracles still happen in our time, and it’s our job to notice and truly appreciate them.

The 11-year-old CUFI, which now boasts 3.5 million members, recently gathered in Washington, DC, amid steamy July temperatures. And like last year, it was an incredibly uplifting experience to be a Jew in a convention hall brimming with positive spiritual energy.

“I come here to get my batteries charged. I see the enthusiasm of the audience. It draws the speaker out; it’s very powerful,” Malcolm Hoenlein, Executive Vice Chairman of the Conference of Presidents of Major Jewish Organizations, told me in an interview. I understood exactly what he meant.

This year, I found myself surrounded by 5,000 friends of Israel, representing all 50 states and 97 percent of the nation’s Congressional districts. As part of the recent proceedings, CUFI celebrated the #JerusalemJubilee—the 50th anniversary of Jerusalem’s reunification in 1967’s Six Day War—with a notable emphasis on miracles.

Yoram Hazony, president of Israel’s Herzl Institute, talked about 2,000 years of Jewish yearning for Zion and how blessed we are to see a time when Jews have returned to a united Jerusalem. Hoenlein noted that G-d has given us “all the miracles” in this generation. And David Brog, CUFI’s founding executive director, called the Jews’ fighting back 50 years ago a miracle.