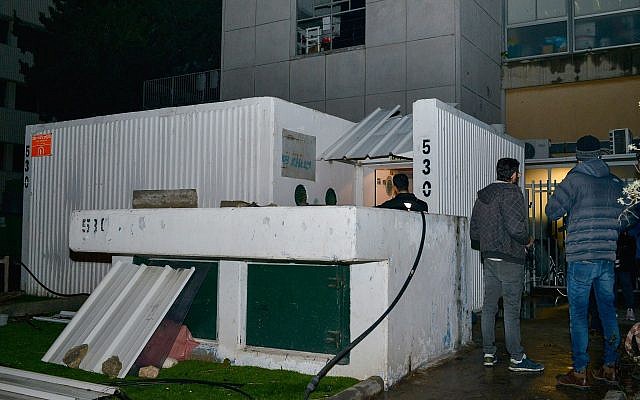 We thought it was a drill: Rockets shock Tel Aviv, including crowd at a war play

The launch of two rockets toward Tel Aviv Thursday evening that triggered rocket alarms in the city for the first time since 2014 caught residents by surprise, with many saying they had trouble believing it was an actual incident and not a drill or a technical malfunction.

Many residents of Israel’s second-largest city and the surrounding metropolis of Gush Dan rushed to bomb shelters and reported hearing explosions. The rockets both hit open areas, and did not cause casualties. However, five people were treated for shock by paramedics.

“I was at a friend’s. We heard a siren and we were sure it was a military drill,” Yifat, a resident of the Florentin neighborhood, was quoted as saying by the Ynet news site. “We went to the staircase, so did the neighbors and nobody knew if it was real.

“We heard two explosions that shook the building. One of the neighbors started crying. The dogs panicked.”