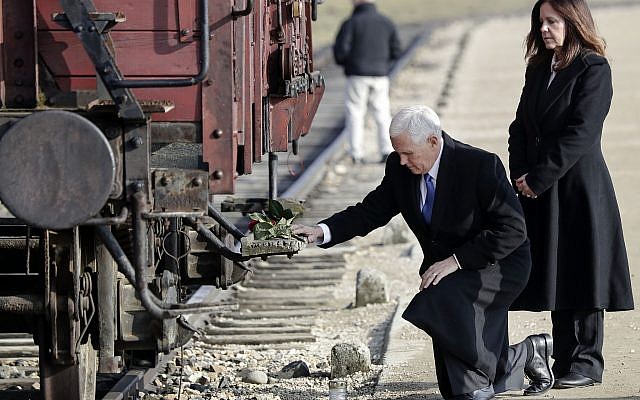 US Vice President Mike Pence visited the memorial site of Auschwitz on Friday along with the Polish president and Jared Kushner, the son-in-law of President Donald Trump, viewing a train car, crematoriums and the hair of victims that make it such a powerful testament to the evil that befell Europe in the last century.

It was the first visit for Pence, a conservative Christian, to the site where German forces murdered 1.1 million people, most of them Jews but also Poles, Roma and others, during the Nazis’ occupation of Eastern Europe during World War II.

They began their visit by walking under the notorious gate with the German words “Arbeit Macht Frei,” the Nazi slogan meaning “Work sets you free.”

There, they paused and turned toward reporters, who took their photos.

Pence toured an exhibition hall that includes human hair and personal belongings of the victims before a wreath-laying at the Death Wall in a courtyard where prisoners were executed. Many of those shot there were Poles who were part of the underground resistance against the German occupation.

The two couples walked side-by-side to the wall for the wreath laying. The Pences held hands and the vice president adjusted a banner reading “From The People of the United States of America.”

Kushner was among a second group that then approached the wall and wreaths.