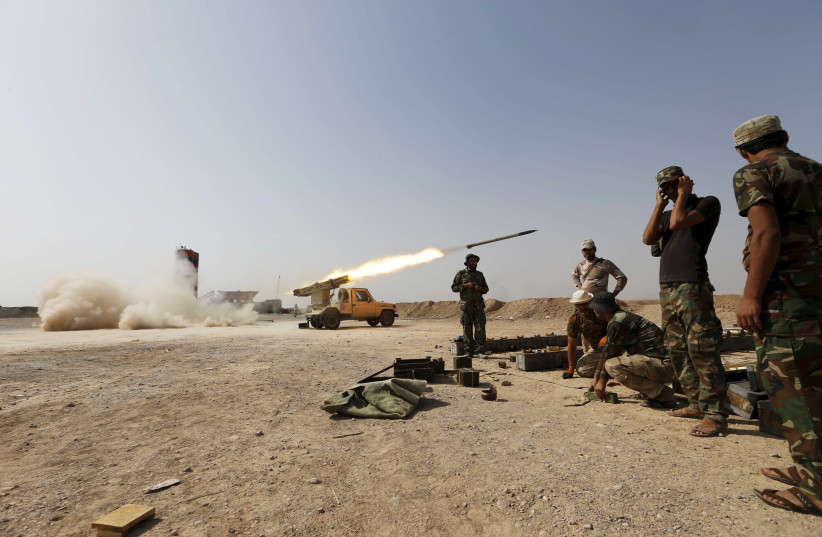 US officials suspect that Iran is behind a series of rocket attacks on Iraqi bases hosting American forces, after four rockets struck an Iraqi military base near the Baghdad International Airport on Monday.

The US military believes that the attacks were carried out by Iranian-backed groups inside Iraq, according to a US official with direct knowledge about the recent attacks, following a CNN report.

Six Iraqi soldiers from Iraq’s Counter-Terrorism Service were injured in the attack on the base near the airport, which hosts some US troops and diplomats, according to Radio Farda. Two of the injured are in critical condition. Launchers found near the area with rockets that hadn’t fired properly, indicated that a larger attack had been planned, according to a statement by the Iraqi military.
On Sunday night, two rockets landed near the Baghdad airport in an attack targeting US forces, according to Al Arabiya.

On Thursday, two Katyusha rockets landed inside Balad air base, but there were no casualties or damage reported from the attack.
Balad base hosts U.S. forces and contractors and is located about 80 kilometers (50 miles) north of Baghdad.

In total, there have been at least nine attacks against US targets in Iraq in the past six weeks, according to Radio Farda. At least one of the attacks has been linked to Kataib Hezbollah, a Shi’ite militia with ties to Iran which has been blacklisted by the US.

“We take these incidents seriously as do our Iraqi Security Forces partners, who are investigating these events. We have made clear that attacks on US and Coalition personnel and facilities will not be tolerated and we retain the right to defend ourselves. US forces operate in Iraq at the invitation of the government of Iraq to support Iraqi forces against ISIS,” said Pentagon spokesperson Cdr. Sean Robertson to CNN.

Secretary of Defense Mark Esper stated on Saturday that the US has seen a “little bit of an uptick” in the attacks, which is “another indicator for us of Iran reaching out.”

The State Department’s Assistant Secretary for Near Eastern Affairs David Schenker stated on Friday that “Iranian-backed militias are now shelling Iraqi bases with American and anti-ISIS Coalition forces on them — Balad, al-Asad, et cetera.” Schenker added that the US is still waiting for full evidence, but “If past is prologue, I’d say there’s a good chance it was Iran that’s behind it.”
According to one official, the rockets used in the attacks have become increasingly sophisticated, since they can be launched for longer ranges and higher explosive power.

The US is considering deploying an additional 4,000-7,000 troops to the Middle East to face the Iranian threat, according to CNN, although Esper played down the issue, saying that the movement of troops as needed is done “routinely.”
Reuters contributed to this report.