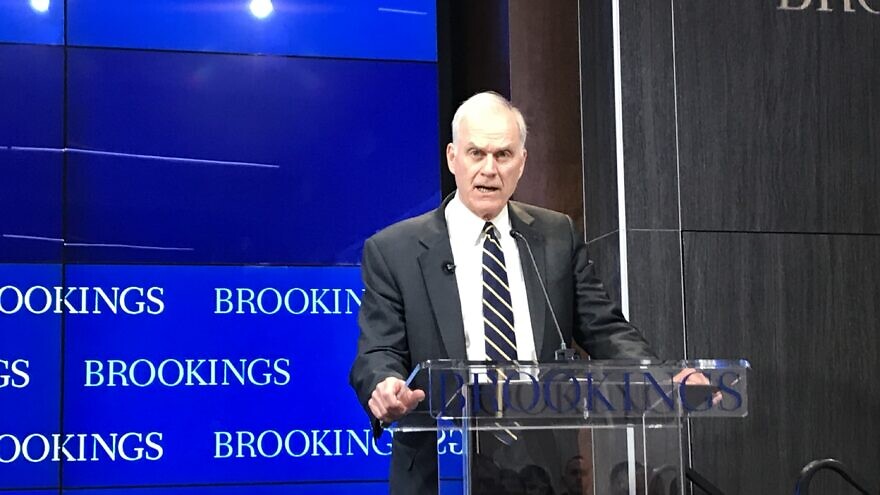 (October 24, 2019 / JNS) U.S. Navy Secretary Richard V. Spencer said on Wednesday that the U.S. Navy is “completely defensible” against the Iranian threat, including in the Persian Gulf.

Spencer’s talk consisted of how the U.S. Navy has prepared its uniformed and non-uniformed men and women during their career, such as providing a quality education in the Navy’s higher-education institutions, and how it is advancing and maintaining its line of fleets.

“Depending upon what levels you’re talking about, I believe we’re completely defensible in where we stand right now with the environment that we’re faced,” he said in response to an inquiry from JNS about whether the U.S. Navy is capable of defending itself against Iran during a question-and-answer following an Oct. 23 discussion at the Brookings Institution in Washington, D.C., about U.S. naval preparedness amid domestic and geopolitical challenges.

Since the United States withdrew from the 2015 Iran nuclear deal, reimposing sanctions lifted under it, in addition to enacting new financial penalties against the regime, Iran has increased attacks, including in the Gulf, over the past year.

In June, Iran shot down a U.S. drone in the Gulf. Although U.S. President Donald Trump decided not to militarily retaliate, he authorized a cyber attack that “wiped out a critical database used by Iran’s paramilitary arm to plot attacks against oil tankers and degraded Tehran’s ability to covertly target shipping traffic in the Persian Gulf, at least temporarily,” reported The New York Times in August, citing senior U.S. officials.

The following month, the USS Boxer, a U.S. Navy ship, “immediately destroyed” an Iranian drone in the Strait of Hormuz.

That same month, the regime seized a U.K.-flagged ship in the Strait of Hormuz that it ultimately released.