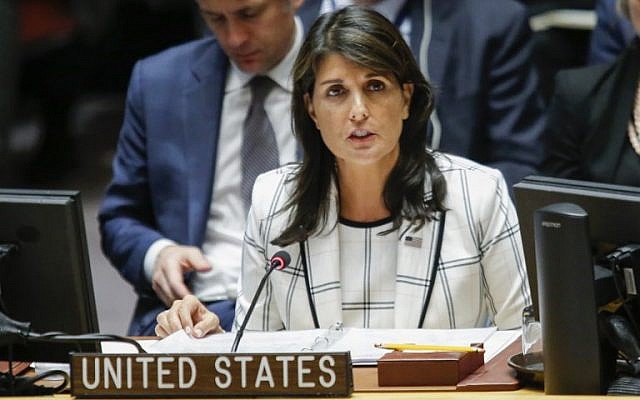 A US source, speaking on condition of anonymity, told Reuters the withdrawal appeared to be “imminent” but had no details.

Diplomatic sources said it was not a question of if but of when the United States retreats from the Human Rights Council, which is holding a three-week session through July 6.

A separate US official in Geneva had no information about a looming pull-out during the upcoming talks, saying: “We are still moving ahead with our engagement for the coming session.”

Nikki Haley, the US ambassador to the United Nations, publicly told the Council a year ago that Washington might leave the body unless a “chronic anti-Israel bias” were removed.

The forum, set up in 2006, has a permanent standing agenda item on what its members says are suspected violations committed by Israel in Palestinian territories, which Washington wants removed.

Washington says the Council is stacked with opponents of Israel and boycotted it for three years under President George W. Bush before rejoining under Barack Obama in 2009.

The 47-member forum last month voted to set up a probe into killings in Gaza and accused Israel of excessive use of force. Jerusalem argues that lethal force is only used when necessary and in extreme circumstances.

The United States and Australia cast the only “no” votes. Israel’s ambassador in Geneva, Aviva Raz Shechter, castigated the Council for “spreading lies against Israel”.

Israel has also taken umbrage at being singled out by the council for a permanent talking point since its membership is comprised of many countries which are know for their documented poor track record on human rights, including Saudi Arabia, Iraq, China and Venezuela.

On Wednesday, Haley reprimanded members of the General Assembly as the body convened to vote on a resolution condemning Israel for violence that has gripped the Gaza border in recent week.

“This resolution blames everything on Israel,” Haley said in her remarks, adding that “it does not even mention Hamas.”