US marks 25 years of peace treaty between Jordan and Israel 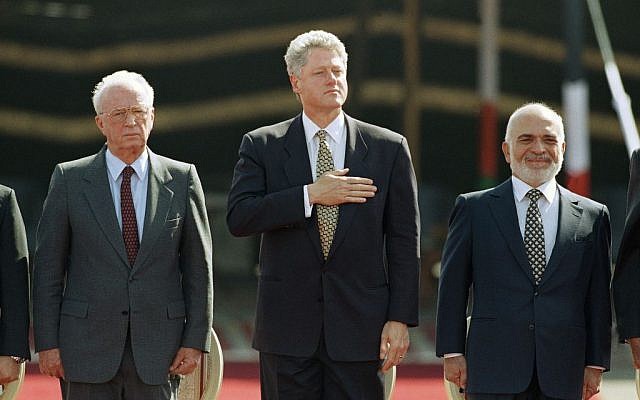 The United States marked the 25th anniversary of the peace treaty between Israel and Jordan.

“Today marks the twenty-fifth anniversary of the signing of the Treaty of Peace between the Hashemite Kingdom of Jordan and the State of Israel, an agreement that began a tradition of peaceful and respectful cooperation that continues today,” read the statement signed by Secretary of State Mike Pompeo and dated Saturday.

“We take this opportunity to praise the enduring efforts of our two allies and friends to find common ground and build a productive and stable relationship for the mutual benefit of the Jordanian and Israeli people,” the statement also said.

The quiet border is considered a cold peace by both Israel and Jordan. There is little public support in Jordan for the agreement, The Associated Press reported. Jordan is upset at the lack of progress in Israeli-Palestinian peace talks, as well as what it perceives as a change in status quo on issues relating to the Temple Mount in the Old City of Jerusalem and other holy sites that its religious Wakf oversees.