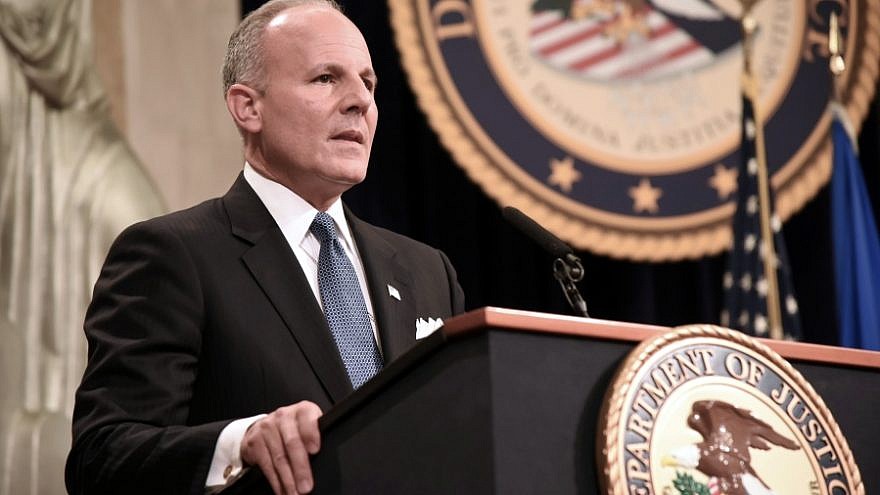 (July 17, 2019 / JNS) The U.S. Department of Justice hosted its first “Summit on Combating Anti-Semitism” on Monday, where U.S. Attorney General William Barr opened the proceedings by calling Jew-hatred a “cancer.”

An invocation by Rabbi Meir Soloveitchik preceded Barr’s remarks. Soloveitchik quoted U.S. President George Washington’s famous letter in 1790 to the Jews of Newport, R.I., which stated that “the Government of the United States, which gives to bigotry no sanction, to persecution no assistance, requires only that they who live under its protection should demean themselves as good citizens in giving it on all occasions their effectual support.”

Additionally, Eric Dreiband, assistant attorney general in the DOJ’s civil-rights division; William Sweeny, assistant director in charge, FBI New York field office; and Jessie Liu, U.S. Attorney, District of Columbia, were part of a panel to discuss their work and the need to report hate crimes, including against Jews.

Issues surrounding anti-Semitism included such hatred on and outside college campuses in the United States and abroad, as well as the synagogue shootings in Pittsburgh and Southern California within a period of six months.

“The stakes for what we do now as a nation are enormous,” said American Jewish Committee chief policy and political-affairs officer Jason Isaacson.

Appealing for a unified approach in the United States, Isaacson argued that “to capably combat anti-Semitism, those who would seek to call out their political opponents for hating Jews must be similarly willing to criticize their allies on their own side of the aisle. Leaders need to lead and conclusively demonstrate that anti-Semitism within their own ranks is unacceptable.”

In her remarks, DeVos said that “Israel has a committed friend at the White House.” She noted that the Department of Education also named Kenneth Marcus—who founded the Louis D. Brandeis Center for Human Rights Under Law, which fights to promote the civil and human rights of the Jewish people—to lead the U.S. Education Department’s Office for Civil Rights. In his current role, Marcus enforces civil-rights laws prohibiting schools from discriminating based on race, ethnicity, color, national origin, disability and age.

Regarding the anti-Israel BDS movement, DeVos said that “these bullies claim they stand for human rights. But we all know that BDS stands for anti-Semitism.”

“Peace in the Middle East begins with recognizing Israel’s right to exist,” she added.

DeVos mentioned cases of anti-Semitism where her department has intervened or is investigating—an example of the former being reaching a resolution agreement with Williams College over the student government rejecting a new pro-Israel group. Another instance is a probe of an anti-Semitic and anti-Israel conference in March hosted jointly by Duke University and the University of North Carolina.

Devos’s stand echoed the views of one of the panels heard at the summit devoted to the rising threat of anti-Semitism on college campuses. JNS editor in chief Jonathan Tobin declared that the attempt to disguise the anti-Semitism inherent in anti-Zionist agitation should be the starting point for any discussion of bias against Jews in the academy. Alyza Lewin of the Louis D. Brandeis Center for Human Rights Under law echoed that concern. At the same panel, William Jacobson of the Legal Insurrection blog noted that BDS activity had resulted in younger Jews being more likely to face anti-Semitism than older ones.

And noting the way university departments have become hostile to Israel and Jews, Charles Small of the Institute for the Study of Global Anti-Semitism and Policy called for the administration to investigate grants from foreign nations.

Anti-Semitism can take ‘the form of violence’

Meanwhile, Carr said “we are living in a time of striking growth in anti-Semitism around the globe … where vandalism in New York and other cities, according to the Anti-Defamation League, occurs on a fairly regular basis, and campuses have become hostile places for Jewish and pro-Israel students.”

Members of the ADL, an organization that has been critical of U.S. President Donald Trump, attended the DOJ event, but were not invited to address the audience or speak on a panel. Nonetheless, an ADL spokesperson told JNS that the organization applauded the DOJ for being “focused on the important issue of rising anti-Semitism in the U.S. and around the world.”

“Nationally respected thought leaders, professors, commentators and attorneys were selected to lend their expertise to this important topic,” said DOJ spokesperson Kerri Kupec. “The Department of Justice is grateful for the participation of all our partners in attendance today, including ADL.”

As part of his remarks, Mnuchin said that “we must never forget about the rallying cry of ‘Never again’ ” and fight against anti-Semitism “every single day,” as it can take “the form of violence,” as has been seen in the synagogue shootings.

He touted getting Germany to increase its funding for the Conference on Jewish Material Claims Against Germany (also known as the Claims Conference), which currently funds social-welfare services for approximately 132,000 Jewish Nazi victims globally.

Wray talked about fighting hate crimes, including against Jews, and illustrated the FBI’s role in doing so.

Among religious groups, Jews are the leading target of hate crimes annually.

While he said that America cherishes freedom of speech, words can turn into violence, and violence can turn into hate crimes. Wray cited James Alex Fields, who rammed his car into a crowd of counter-protesters during the white-nationalist rally in Charlottesville, Va., in 2017, killing a 32-year-old woman, Heather Heyer, and injuring dozens of people.

On Monday, Fields was sentenced to life, plus 419 years, behind bars, in a state case, while he was sentenced last month to life in prison on federal hate crime charges.

The FBI head said that most hate-crime investigations are “reactive,” but working with civil rights and other groups is crucial to fostering trust and understanding between them and law enforcement.

As such, he mentioned the FBI’s requirement for new agents to visit the U.S. Holocaust Memorial Museum in Washington, D.C., as part of a joint program between the ADL and the museum called “Law Enforcement and Society: Lessons of the Holocaust.”