US, Israeli firefighters work side by side as rockets fall 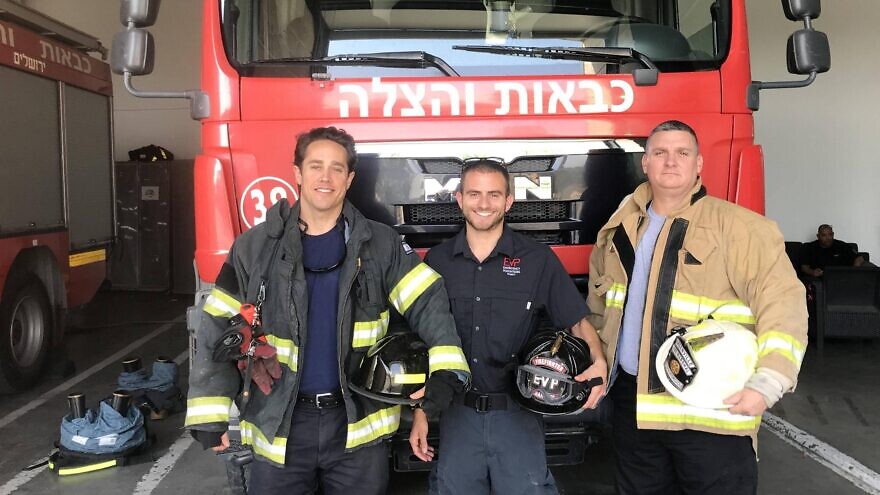 (November 17, 2019 / JNS) As rockets fell on southern and central Israel last week, a team of U.S. firefighters worked side by side with their Israeli counterparts to extinguish brush and building fires, and deal with other emergencies.

However, according to EVP Emergency Deployment Director Eitan Charnoff, they were already in the country when the flare-up in hostilities between Israel and Gaza-based terrorist groups broke out.

“They were originally deployed because of anticipated high winds later in the week,” said Charnoff. ”We were fortunate to have them here given the unexpected rocket attacks.”

Each of the American firefighters trains and travels to Israel on their own personal time, and some have even defrayed a portion of the deployment cost. Jake Papageorgiou, a firefighter and evangelical Christian from Greenville, Texas, left his wife and two children for a week to travel to Israel.

“I wanted to come to show that Americans support you,” he said. “It is great to be here. You can feel the firefighter brotherhood is alive and well. Everyone really watches out for each other.”

Spencer MacWilliams, a Jewish firefighter from Brookline, Mass., said coming to Israel had been an amazing experience, and that the U.S. firefighters were welcomed with open arms.

“I can think of no better way to support Israel than volunteering in a firehouse here,” he said.

The American firefighters have been riding and working side by side with their Israeli counterparts on 10 or more emergency calls each day. Both Papageorgiou and MacWilliams noted that Israeli firefighters are expected to know how to perform in all types of emergencies, from building fires to vehicle fires to wildland fires to medical emergencies.

EVP’s Charnoff noted that the Sinai Temple of Los Angeles Men’s Club has provided much of the funding for the latest waves of deployment of some 18 U.S. firefighters.

Rabbi Erez Sherman of Sinai Temple said they are proud to support this effort. Charnoff noted hundreds more EVP firefighters and medical personnel are standing by, ready to assist if needed.