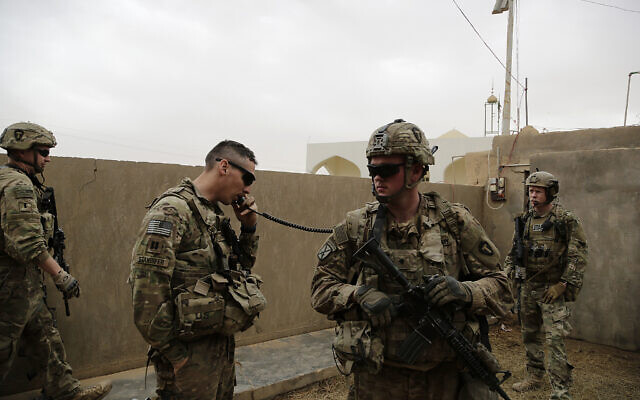 Iran struck back at the United States early Wednesday for the killing of a top Iranian general last week, firing a series of surface-to-surface missiles at an Iraqi air base housing US troops and warning the United States and its allies in the region not to retaliate.

The Pentagon confirmed the strike at Ain Assad as well as another at a separate base housing US troops.

US Defense Department spokesman Jonathan Hoffman said the US was “working on initial battle damage assessments.”

The White House said in a separate statement that US President Donald Trump was “monitoring the situation closely and consulting with his national security team.”

There was no immediate word on injuries.

Iranian state TV said the attack was in revenge for the killing of Revolutionary Guard general Qassem Soleimani, whose funeral Tuesday in his hometown of Kerman prompted angry calls to avenge his death, which drastically raised tensions in the Middle East.

Iran’s Revolutionary Guard warned the US and its regional allies against retaliating over the missile attack against the Ain Assad air base in Iraq’s western Anbar province. The Guard issued the warning via a statement carried by Iran’s state-run IRNA news agency.

“We are warning all American allies, who gave their bases to its terrorist army, that any territory that is the starting point of aggressive acts against Iran will be targeted,” the Guard said. It also threatened Israel.

Ain Assad air base was first used by American forces after the 2003 US-led invasion that toppled dictator Saddam Hussein. It later saw American troops stationed there amid the fight against the Islamic State group in Iraq and Syria.

Wednesday’s revenge attack came a mere few hours after crowds in Iran mourned Soleimani and as the US continued to reinforce its own positions in the region and warned of an unspecified threat to shipping from Iran in the region’s waterways, crucial routes for global energy supplies. US embassies and consulates from Asia to Africa and Europe issued security alerts for Americans. The US Air Force launched a drill with 52 fighter jets in Utah, just days after Trump threatened to hit 52 sites in Iran.

The US blames Soleimani for killing US troops in Iraq and accused him of plotting new attacks just before he was killed. Soleimani also led forces supporting Syrian President Bashar Assad in that country’s civil war, and he also served as the point man for Iranian proxies in countries like Iraq, Lebanon and Yemen. Russian President Vladimir Putin met with Assad in Syria on Tuesday amid the tensions between Washington and Tehran.

Soleimani’s slaying already has led Tehran to abandon the remaining limits of its 2015 nuclear deal with world powers as his successor and others vow to take revenge.

In Iraq, pro-Iranian factions in parliament have pushed to oust American troops from Iraqi soil following Soleimani’s killing. Germany and Canada announced plans to move some of their soldiers in Iraq to neighboring countries.

According to a report on Tuesday by the semi-official Tasnim news agency, Iran has worked up 13 sets of plans to avenge Soleimani’s death. The report quoted Ali Shamkhani, the secretary of Iran’s Supreme National Security Council, as saying that even the weakest among them would be a “historic nightmare” for the U.S. He declined to elaborate,

“If the US troops do not leave our region voluntarily and upright, we will do something to carry their bodies horizontally out,” Shamkhani said.