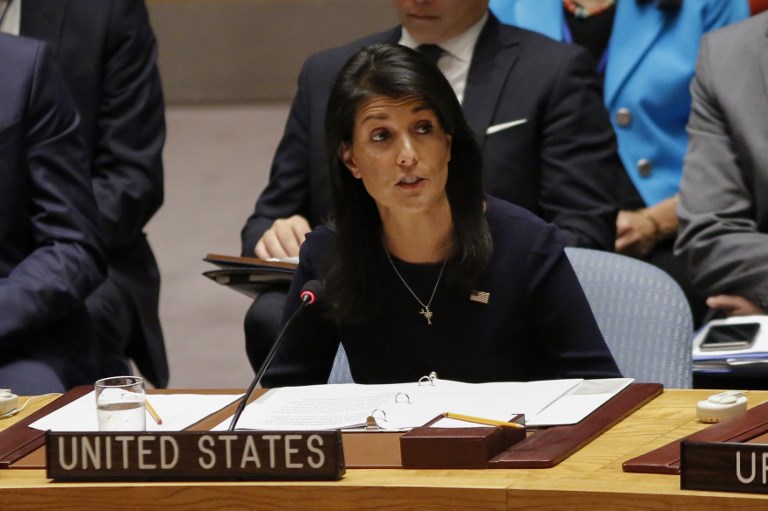 UNITED NATION — The United States on Friday asked the UN Security Council to reject the “unacceptable” and “deeply disturbing” remarks by Palestinian president Mahmoud Abbas about the Holocaust that included “vile anti-Semitic slurs.”

Abbas apologized over the remarks delivered in an address to the Palestinian National Council, but a US-drafted statement called on the president to “refrain from anti-Semitic comments.”

The proposed statement would express the council’s “serious concern” about Abbas’ remarks, which “included vile anti-Semitic slurs and baseless conspiracy theories, and do not serve the interests of the Palestinian people or peace in the Middle East.”

The draft seen by AFP urges “all parties to avoid provocations that make the resumption of negotiations more difficult.”

During a lengthy speech Monday in front of hundreds at a rare session of the Palestinian National Council in Ramallah, the 82-year-old PA leader alleged that the Holocaust was not caused by anti-Semitism, but rather by Jews’ “social behavior, [charging] interest and financial matters.”

Abbas’s speech has been criticized as anti-Semitic by various political figures in Israel, including Prime Minister Benjamin Netanyahu, as well as US Ambassador to Israel David Friedman, the European Union and Germany, among others. The New York Times called for Abbas’s resignation in an editorial Wednesday.

On Friday, Abbas apologized and condemned the Holocaust “as the most heinous crime in history.”

Council members were given until 4:00 p.m. (2000 GMT) to raise objections to the draft statement.

The incendiary content of Abbas’s speech, which was reported by The Times of Israel late Monday night, was not included in the official Palestinian news agency’s English press release about his address or in most initial international coverage of it.