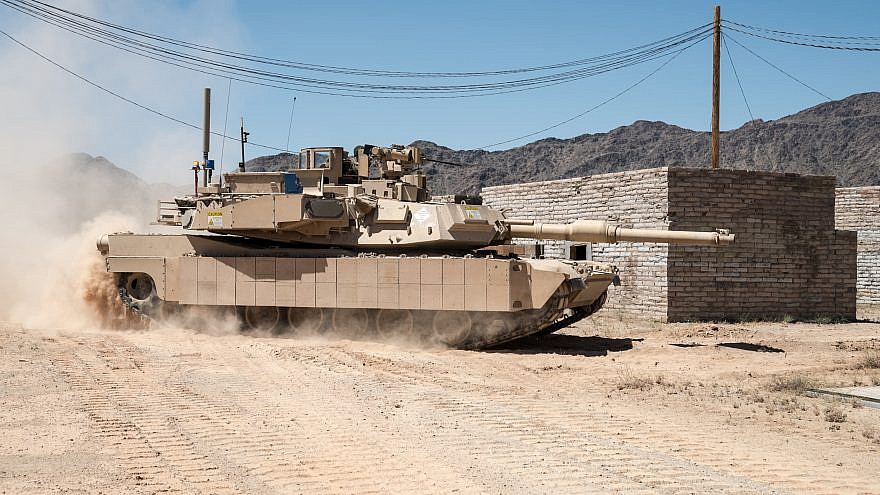 (October 18, 2019 / JNS) In recent days, Israeli defense corporation Rafael made a dramatic announcement, stating that it delivered on time the first batch of Trophy Active Protection System to the U.S. Army.

Trophy, a system that was first deployed by the Israel Defense Forces in 2011 and which has intercepted many threats fired at Israeli armored vehicles, will be eventually be installed on-board four American M1 main battle tank brigades, for both the U.S. Army and Marine Corps.

The fact that the world’s most powerful military chose an Israeli active protection system to protect the lives of its tank crews is historic.

In Israel, Trophy is installed onboard Mk3 and Mk4 Merkava tanks, and onboard the advanced Namer armored personnel vehicle. It has made many successful combat interceptions of anti-armor missiles and rockets, particularly those fired by Gazan terror factions, with no injuries to Israeli personnel or damage to platforms.

Trophy’s radar is made by Israel Aerospace Industries subsidiary, Elta.

The system has accumulated more than 600,000 operational hours and underwent 4,000 successful field tests. It is now under contract for production for thousands of systems.

The U.S. Army is in a rush to install the system on its tanks because it wants to urgently send them to the European theater, according to statements by American military officials who manage combat vehicle upgrades. In the past, the United States spent a great deal of money trying to develop Active Protection Systems, but didn’t manage to find one it was satisfied with.

It therefore took a decision that is far from being a given and looked beyond American shores for a solution.

The armored brigades that will receive Trophy will take part in American deployments to Europe, dubbed “Operation Atlantic Resolve,” which began after Russia’s seizure of the Ukrainian Crimea region in 2014. The United States is seeking to reassure European allies, and deploys infantry and armored forces as a result.

Rafael has made major sales to America before, including Popeye air-to-surface missiles and electro-optic pods that help American aircraft gather critical intelligence.

Israeli defense firm Plasan Sasa has in the past sold the U.S. passive armor for thousands of vehicles, which saved many lives. In previous years, Rafael teamed up with General Dynamics to equip Bradley fighting vehicles with explosive reactive armor.

In passive defenses, plates of armor stop incoming threats like anti-tank missiles and IEDs. In explosive reactive armor, explosives sandwiched in between armor plates set off the warhead of the incoming threat.

Yet active protection is a breakthrough technology—one that Israel developed as a painful lesson learned from the destruction of multiple tanks by Hezbollah missile cells during the Second Lebanon War of 2006.

Since being deployed in 2011, Trophy has saved many Israeli personnel on the battlefield. Now, it’s set to do the same for American soldiers.

The selection by the U.S. of Trophy is a statement on the global stage of its faith in Israeli defense technology. Several other states could be next in line to purchase the system, including potential European clients such as Germany and Poland. Australia, which is also seeking to upgrade its land forces, is another likely buyer.

Meanwhile, an American brigade of Bradley M2 armored vehicles is undergoing advanced trials with the Iron First Active Protection System, which is made by Israel’s Elbit company.

Israeli defense companies have established cooperation with local partner companies since governments insist that local firms conduct the marketing, handle the transactions, and most importantly, that the systems are locally produced.

As a result, Rafael has teamed up with U.S. contractor Leonardo DRS, which specializes in ground combat systems. Leonardo DRS is headquartered in Arlington, Va.

According to a statement by Rafael, “the deliveries are the culmination of a multi-year qualification process. A joint team of government and industry from both the U.S. and Israel worked together to adapt and integrate Trophy for both Army and Marine Corps Abrams variants.”

Leonardo DRS’s CEO, William J. Lynn, described Trophy as an “advanced defensive protection systems for our front-line tanks to give our warfighters a needed layer of survivability against real and emerging battlefield threats.”

He added that “our partnership between Leonardo DRS and Rafael has worked tirelessly to bring this battle-proven technology to the U.S. military while improving the system to meet the stringent needs and requirements from the customer.”

Rafael CEO and president, Maj. Gen. (Ret.) Yoav Har-Even, described the first delivery as “a major milestone in U.S.-Israel cooperation. There is no greater pride and satisfaction than the knowledge that the technology developed by Rafael and Elta over many years of investment, trials and combat performance will play an instrumental part in safeguarding American lives, just like it has saved Israeli lives and revolutionized the way our armored forces perform their missions.”