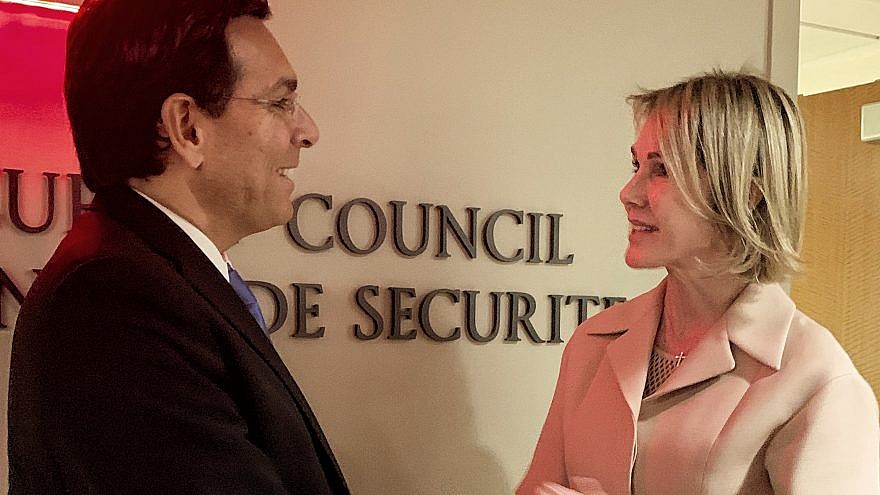 (January 22, 2020 / JNS) U.S. Ambassador to the U.N. Kelly Craft took Iran to task and staunchly backed Israel at a U.N. Security Council debate on the Middle East on Tuesday.

“While the world criticizes Israel, Israel is making the world a better place. The council should not lose sight of this fact,” she said, urging council members to instead focus on Iran.

“Our failure to address Iran’s central role in destabilizing the region sends a powerfully damaging message to those seeking lasting peace and prosperity in the region,” she said. This, she argued, “only encourages further instability, which puts the peace we all seek at greater risk.”

Craft called upon her U.N. colleagues to “focus on the regional actor fueling division, violence and hatred. The regime that funds and trains militants focused on the destruction of Israel. The regime that provides weapons and other support to the Houthis and to Hezbollah, props up the Assad regime [in Syria] and seeks to interfere with Iraq’s fragile democracy. The regime that guns down its own citizens when they protest the corruption, lies and mismanagement of the leadership.”

Despite Iran’s long history of advocating the obliteration of Israel and aggressively undermining regional peace and security, she added, the regime “too often escapes serious scrutiny by this body.”

Speaking to reporters after the Security Council session, Craft doubled down on her statements, saying, “After decades of having the same meeting about the Middle East and criticizing Israel, I call upon this forum to change the dialogue.”

Referring to the downing by the Iranian armed forces of a Ukrainian passenger flight on Jan. 8, killing all 176 passengers and crew, Craft added, “If you look at the 176 victims of that plane crash, it is unacceptable. They’re killing their neighbors, their people, arming Hezbollah and most definitely propping up the Assad regime, so I think we need to call it like it is.”