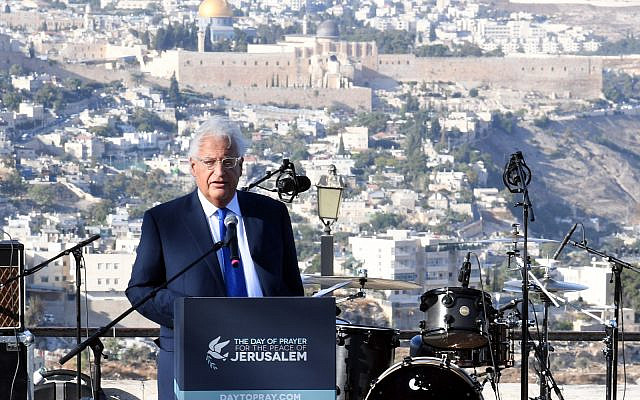 Shared values and a common history, not soldiers and weapons, guarantee a nation’s security, US Ambassador to Israel David Friedman said Sunday.

Addressing a rally of pro-Israel Evangelicals, Friedman hailed the recently inaugurated Pilgrimage Road, a new archaeological site in Jerusalem’s City of David, which lies underneath the Palestinian neighborhood of Silwan, as a “once in a century discovery” that proved beyond any doubt the existence of the Jewish Temple in the city.

“Jerusalem does not only move us spiritually. It literally keeps us safe,” said Friedman. “Let me be clear about an important point: no quantity of bombs or fighter jets or troops really guarantees anyone’s security. What makes a people safe, what makes us all safe, is when we stand for something, when we collectively share values, beliefs, goals and a common history. That’s what Israel’s enemies try to deny it when they object so angrily to the Pilgrimage Road. Because if Israel, God forbids, loses its history, it stands for nothing, and it is no longer safe.”

On June 30, Friedman and other US officials used a sledgehammer to hammer through what they later said was a newly erected cardboard wall in front of the Pilgrimage Road, a now-subterranean stairway that was said to have served as a main artery for Jews to the Temple Mount thousands of years ago.

That event was harshly criticized by Palestinian and Jordanian officials as well as Israeli activists, who claimed the use of a sledgehammer was insensitive and that the opening of the site would further entrench an Israeli presence in eastern parts of the city that Palestinians hope will one day serve as their capital.

Archaeologists have been excavating at the City of David National Park in the Silwan for the past eight years. The area has several small Jewish enclaves.

Speaking at the “Global Day of Prayer for the Peace of Jerusalem,” organized by the Eagles’ Wings Evangelical group, Friedman addressed the controversy at considerable length.

“Not everyone was pleased with this incredible discovery,” he said.

“Those who sought to deny the connection between the Jewish people to this holy city in Jerusalem, they all protested in the strongest terms that their denial of ancient Jerusalem as the capital of Israel, their denial of the ancient temple itself, had been exposed as a lie. Exposed — not by politicians, not by activists, not by clergy, but by hard objective, irrefutable science.”

Friedman continued: “Now, sometimes the truth hurts. But the denial of truth hurts even more.”

The US administration will never give any platform to those “who seek to deny the truth about Jerusalem,” the ambassador added. “Such denial doesn’t bring peace. Such denial brings no tranquility.”

Rather, he vowed to “continue to pray for the peace of Jerusalem as we do today, but it will be for peace based upon the truth, the undeniable and now the scientifically corroborated truth, about how the roots of the Jewish people and the roots of Christianity are both centered in this Holy City, a city small in size but so immeasurably large in purpose and in meaning.”