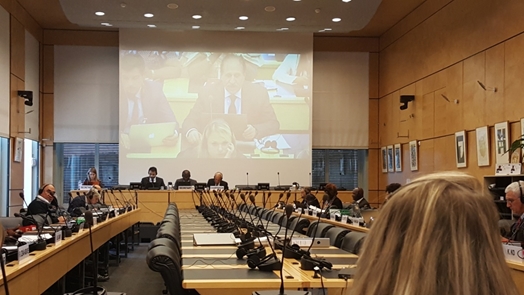 GENEVA—For the first time, a United Nations panel this week criticized the Palestinians, urging them ”to stop hate speech and incitement to violence that fuels antisemitism.”

The UN Committee on the Elimination of Racial Discrimination (CERD) in Geneva said it was ‘’concerned about statements by Palestinian officials, as well as in school textbooks, that promote hate speech against Israelis’’ which it found “fuels hatred” and “may incite violence” and “antisemitism.”

The panel called on the Palestinians to “remove any derogatory comments and images from school curricula and textbooks that perpetuate prejudices and hatred.”

In addition, the panel found that Palestinians laws and policies failed to implement UN treaties on racism, or to properly investigate complaints for acts of racial discrimination.

The 18 independent experts reviewed the Palestinian record and those of six other countries at a session that ended on Thursday, when they issued their findings.

According to Hillel Neuer, Director of UN Watch, an NGO which submitted a legal submission and brief the UN panel to document systematic anti-Jewish hate and other forms of racism incited daily by the Palestinian Authority and Hamas officials, preachers, school books, TV stations, and social media, ‘’what happened this week was unprecedented.’’ ‘’This is the first time since 1974, when Yasser Arafat and the PLO were welcomed into the United Nations, that the world body’s spotlight was officially placed on Palestinian racism, discrimination and antisemitism,’’ he said.

UN Watch commended two other groups, NGO Monitor and IMPACT-se, for their interventions with the UN committee. as well.

IMPACT-se,a research, policy and advocacy organization that monitors and analyzes education and textboooks. addressed committee members at a lunchtime fact-finding session, flatly refuting claims of the Palestinian pressure group Al-Haq that there is not hate in the PA curriculum by presenting examples from the current textbooks with references.

Following this lunchtime session, Brazil’s Deputy Special Secretary for Human Rights, Silvio Albuquerque, asked the Palestinian representatives about “the presence of antisemitic and discriminatory contents in textbooks used by children and teenagers in Palestinian schools,” examples that IMPACT-se presented. Albuquerque demanded that the Palestinian delegation “provide a concrete and factual examples of recent reviews in textbooks eliminating direct or indirect reference to antisemitism and racial discrimination.”