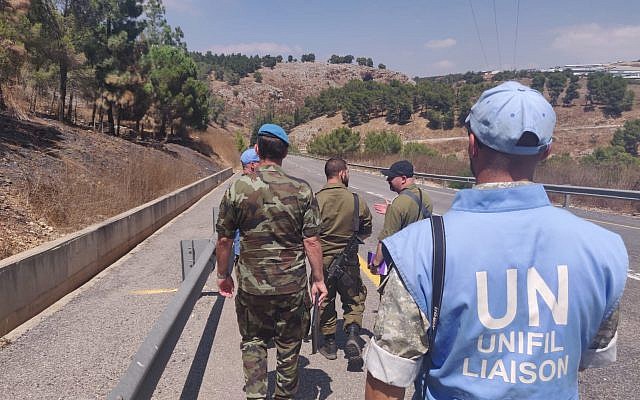 On Sunday afternoon, the Iran-backed terror group fired three anti-tank guided missiles at Israeli positions near the security fence — two of them at a military vehicle and one at a battalion headquarters. No Israeli soldiers were injured, and the IDF retaliated by firing approximately 100 artillery shells and bombs at Hezbollah positions in southern Lebanon. No Lebanese casualties were reported.

The head of the UN’s Interim Force in Lebanon (UNIFIL) called the Hezbollah missile attack a “serious incident in violation of UN Security Council resolution 1701,” referring to the decision that ended the 2006 Second Lebanon War and required all armed terror groups remain north of the country’s Litani River.

“Following the commander of UNIFIL’s declaration on Sunday [September 1] that a violation of the UN Security Council resolution 1701 took place by Hezbollah, yesterday an investigation into the event was conducted by a technical team from UNIFIL, at the IDF’s request,” the army said in a statement Thursday.

The technical team visited the road where the anti-tank guided missiles were fired at the military vehicle and the battalion headquarters that was targeted in the strike.

“The findings of [UNIFIL’s] report will be presented to the UN headquarters in New York,” the IDF said.

Kohavi called on the UN peacekeepers and the Lebanese government to take action against Hezbollah’s precision missile project, indicating that Israel would be forced to act if they didn’t.

“The current state of affairs is not one we can come to terms with,” he said.

Israel has repeatedly claimed that the Hezbollah terror group, occasionally aided by the Lebanese Armed Forces, maintains an active presence in southern Lebanon of both fighters and weaponry despite this being proscribed by UN resolution 1701. UNIFIL, which is tasked with ensuring the resolution’s implementation, has indicated that the constraints of its mandate prevent it from being able to fully investigate Israel’s claims, namely because of the peacekeepers’ inability to enter private property.

Israel and Hezbollah, which fought a month-long war in 2006, have indicated they do not want to go to war but appeared on a collision course in recent days after Hezbollah vowed it would retaliate for a pair of Israeli strikes against the Iran-backed terrorist group — one in Syria claimed by Israel, and another, in Beirut, that the group lays at Israel’s door.