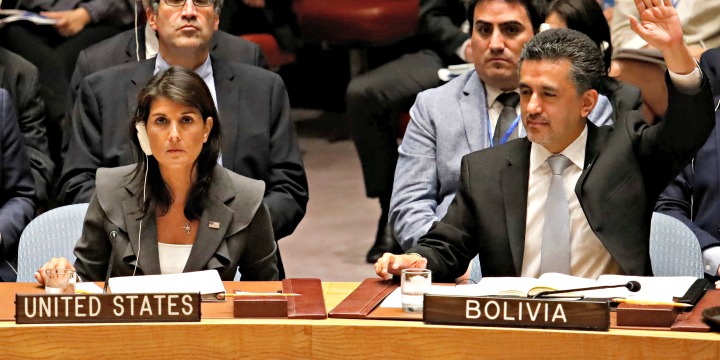 The majority of the 15 states on the UN Security Council were “willing to blame Israel, but unwilling to blame Hamas, for violence in Gaza,” the American Ambassador to the UN, Nikki Haley, said on Friday after the US vetoed a Kuwait-sponsored resolution that urged the deployment of an international force to the West Bank and Gaza.

“It is now completely clear that the UN is hopelessly biased against Israel,” Haley said after the vote. “The United States will not allow such bias, which is why we did not hesitate to cast our veto.” Earlier this week – at an emergency session of the Security Council called by the US to condemn rockets fired by Palestinian terrorists in Gaza against Israel – Haley remarked that the Palestinians did not require protection from an external predator, but from a Hamas leadership that cynically manipulates the civilian population into violence.

Israel’s UN Ambassador, Danny Danon, condemned the Kuwaiti draft “as a hypocritical resolution that sought to condemn Israel while failing to even mention the terrorists of Hamas as the root cause of violence and unrest in our region.”

Danon continued: “We thank the United States for vetoing the resolution and commend all the Council members who in refusing to support it, defended Israel’s right to defend our citizens.”

Of the four remaining permanent members of the Security Council, France, China and Russia all voted in favor of the resolution, while the UK abstained.

Ethiopia, The Netherlands and Poland – all non-permanent members – also abstained on the vote, while Bolivia, Equatorial Guinea, Kazakhstan, Kuwait, Peru and Sweden all voted in favor.