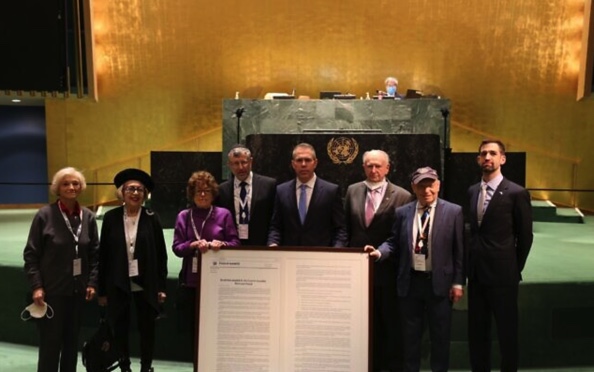 The United Nations General Assembly adopted a resolution aimed at combatting Holocaust denial on Thursday, in what was just the second time since Israel’s establishment that a measure its delegation brought before the forum managed to pass.

The resolution provides a specific classification for Holocaust denial, using the working definition put together by the International Holocaust Remembrance Alliance. It also provides actions expected to be taken by signatory countries in order to address the phenomenon, and demands social media networks remove posts that fall under the IHRA definition.

One hundred and fourteen countries cosponsored Resolution A/76/L30 and only Iran publicly voiced its opposition. The representative from the Islamic Republic — whose leaders have a long history of Holocaust denial — claimed the resolution marked another attempt by Israel “to exploit the suffering of Jewish people in the past as cover for the crimes it has perpetrated over the past seven decades against regional countries.”