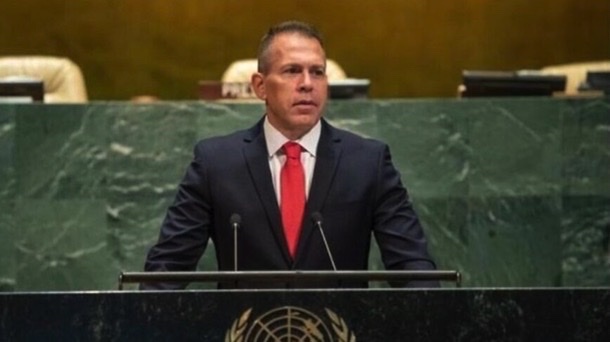 Israel’s ambassador to the United States and the United Nations was barred on Monday from bringing a photo into the General Assembly highlighting the anti-Semitic views of a school teacher in the Gaza Strip.

Erdan had meant to show the picture during a discussion on the United Nations Relief and Works Agency for Palestine Refugees (UNRWA), in an effort to highlight the problem of incitement in UNRWA-operated schools in Gaza. However, a security team was instructed by UNRWA staff to prevent him from entering the General Assembly hall with the photo, which showed an online post by the UNRWA-employed teacher in which he spread anti-Semitic views and quoted Hitler as a source of inspiration.

The Israeli ambassador addressed the incident in his speech, saying: “I am shocked, because I brought here with me a photo of a UNRWA teacher’s post glorifying the most horrific mass murderer in history, Adolf Hitler. Unfortunately, shockingly, I was prevented from bringing in this photo in order to share this proof with the other distinguished ambassadors here.”