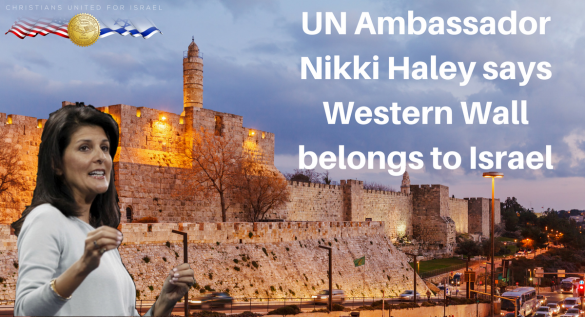 Nikki Haley, the U.S. ambassador to the United Nations, said the Western Wall belongs to Israel and Israel’s capital should be in Jerusalem.

Haley made the comments during an interview Tuesday with the Christian Broadcasting Network in the wake of reports that a Trump administration official, responding to a request that Israeli officials accompany President Donald Trump when he visits the Western Wall, replied that the Western Wall “is not your territory, it’s part of the West Bank.” A White House spokesman later told JTA that the staffer’s remarks “do not represent the position of the United States and certainly not of the president.”

The interview by the CBN’s David Brody in New York is scheduled to air Wednesday evening.

Trump’s visit to the Western Wall, which reportedly will include his Jewish daughter and son-in-law, Ivanka Trump and Jared Kushner, has been billed as a private visit.