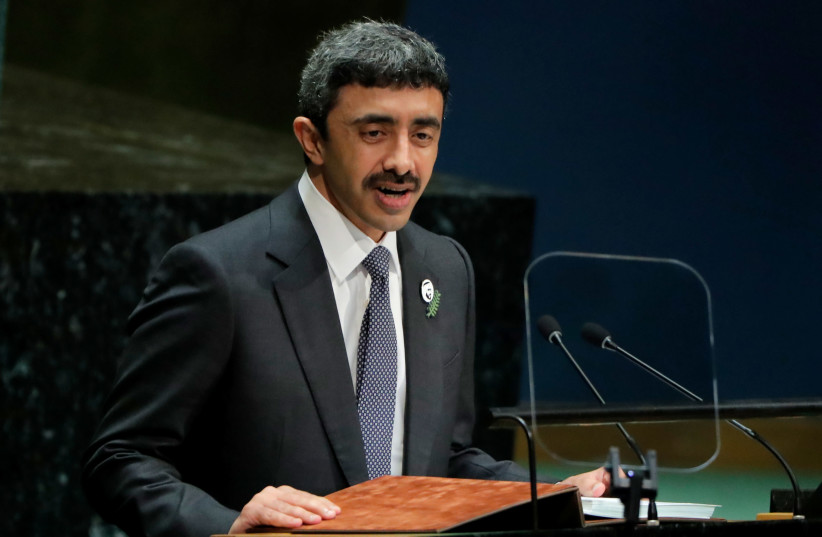 Sheikh Abdullah bin Zayed Al Nahyan, Minister of Foreign Affairs and International Cooperation for the United Arab Emirates, tweeted an article supporting an emerging alliance of Arab states with Israel. He tweeted from his personal account to his 4.6 million followers. The tweet repeated the headline of the article: “Islam’s reformation, an Arab-Israeli alliance is taking shape in the Middle East.”

Prime Minister Benjamin Netanyahu responded that he welcomed closer readings between Israel and many Arab states. “The time has come for normalization and peace.”

“A new narrative is emerging in the Middle East,” wrote Ed Husain in an article on Saturday in The Spectator arguing that an Arab-Israeli alliance is taking shape in the Middle East. “Sunni Arab neighbors are changing course,” he wrote, contrasting this year with the 1960s when Israel’s neighbors sought to destroy the country. “Islamist leaders are losing their appeal, at a time when Iran, with its brand of theological fascism, poses a threat to Israel and the Arab world alike.”

The article argued that polls show that while religious extremism is falling in the region, young people are open to new ideas. They want prosperity and some are open to build new alliances, including with Israel. The author of the article is currently on a visit to Israel, and tweeted photos from Tel Aviv on Friday. “In Tel Aviv today with Ibn Sina, Maimonides and Aquinas,” he wrote, referencing historic Jewish, Islamic and Christian philosophers. Husain has worked at influential think tanks, including Civitas and the Wilson Center’s Middle East program. He is an author and advisor.

By retweeting the article, the UAE’s influential minister gave wind to it and spotlighted it to his four million followers. Many of the comments were positive. The UAE has been a key ally of Saudi Arabia in recent years and has also been leading the region to confront extremism, including the Muslim Brotherhood and Tehran’s regime. However, the UAE is also in a complex position because it wants to support tolerance but knows that Iran is a neighbor across the Gulf. The US has Al Dhafra air base in the UAE and the French are basing a force to help with maritime security in the wake of Iranian attacks on tankers in May and June this year. The UAE has generally been seen as having shared interests with Israel in recent years.

Husain’s article noted that Abu Dhabi is pushing for coexistence in the region. “In Dubai, Jews have been worshiping at a synagogue for several years now. Rabbis from Israel, America, Australia and Europe have been attending annual international Muslim peace conferences.” There has been talk about a US-supported non-aggression pact between Israel, the UAE and several other states in the region. Israel will participate in an expo in Dubai in 2020. Israeli Sephardic Chief Rabbi Shlomo Amar attended an interfaith gathering in Bahrain recently. Israeli minister for Culture Miri Regev went to the UAE in 2018 during the same period that Prime Minister Benjamin Netanyahu went to Oman. “King Hamad of Bahrain has also led a path towards more open relations between Islam and Judaism,” Husain wrote.

There are signs of a “religious glasnost” with Saudi Arabia as well. “Several Saudi bloggers, Youtubers and Twitter personalities have been praising Israel in Arabic.” Husain said he has noticed a change in mood in the region. Part of this is shared interests against Iran’s threat and heavy hand in Iraq, Lebanon, Yemen and Syria. “Israel is being seen by moderate Arab governments as a trade and security partner.” Israel and many Arab states were united in an uproar over the Obama administration’s Iran deal. He even notes that an Arab prince recently asked, “Who else will fly in joint missions against Iranian targets with us?” Husain argued that now is the time for a rebirth of tolerance after seven decades of antisemitism in the region. He says that the Quran can also point the way because of respect for Jews in Islam. “There are enough historical and scriptural narratives of Muslim-Jewish fraternity to form the basis for rapprochement.” It can lead to decades of peace.

For Israel, the Gulf and neighbors such as Jordan and Egypt, there are many shared interests. For instance, concerns about energy in the Mediterranean are drawing Israel and Egypt closer. The UAE recently met with Greek officials to express concern about Turkey’s role, and also the Libya crisis. Israel, Greece, Egypt and Cyprus have shared interests in energy and natural gas issues off their coasts.