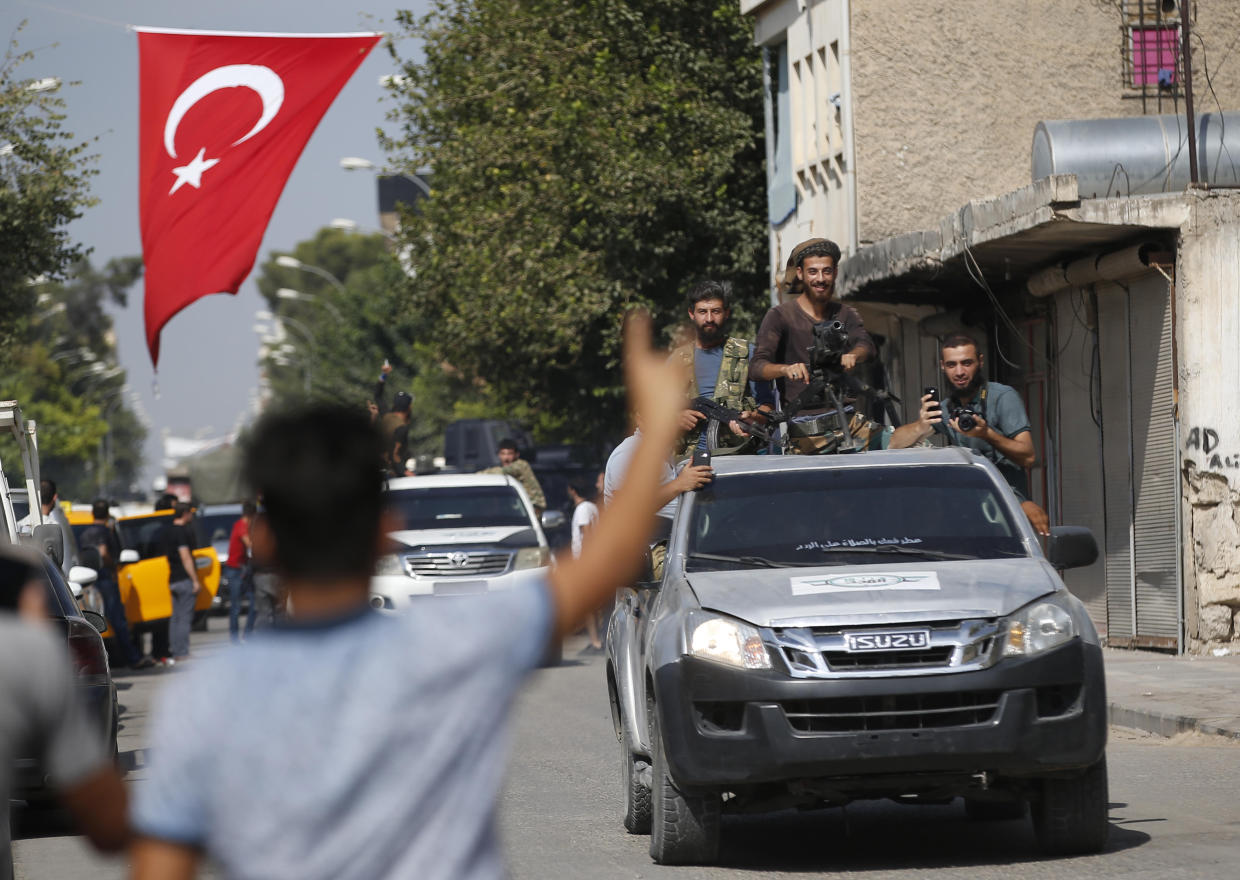 The withdrawal has sparked perhaps the strongest criticism of the president from Republicans of any issue since Mr. Trump’s presidency, and at a time when he most needs Republicans’ support during the impeachment inquiry. Republicans have been trying to talk the president out of the decision, as Turkey moves deeper into Syria, threatening Kurdish allies who helped the U.S. defeat ISIS fend for their lives.

“Pleased to have a conversation with Senator @LindseyGrahamSC this morning,” Pelosi tweeted. “Our first order of business was to agree that we must have a bipartisan, bicameral joint resolution to overturn the president’s dangerous decision in Syria immediately.”

McConnell said he looks forward to talking with his colleagues in the Senate and with senior administration officials about “what the United States can do to avoid a strategic calamity.” He went on to say that while Turkey is a NATO ally, its offensive against the U.S.’ Kurdish partners “is jeopardizing years of hard-won progress in the fight against ISIS,” and he argued that the withdrawal of U.S. forces from Syria now would “re-create the very conditions that we have worked hard to destroy and invite the resurgence of ISIS.” More broadly, he said, withdrawal would create a power vacuum that Iran and Russia would exploit, which is “a catastrophic outcome” for U.S. strategic interests.

Graham, in an appearance on Fox News’ “Fox and Friends,” said the Trump administration would work with Republicans and Democrats to “crush” Turkish President Recep Tayyip Erdogan and “break his economy” until he stops the bloodshed in northern Syria. The South Carolina senator also said he would be meeting with the president Monday afternoon. He told the Fox News hosts that Turkey would see a “united front,” and said that in addition to Pelosi, he was talking with other Democrats — Senators Chris Van Hollen and Bob Menendez.

The U.S. was “preparing to evacuate” about a thousand U.S. troops from northern Syria, Defense Secretary Mark Esper told “Face the Nation” in an interview Sunday. The president said Monday that “a small footprint of United States forces will remain at At Tanf Garrison in southern Syria to continue to disrupt remnants of ISIS.”

The Kurds, former U.S. officials and senior Republican lawmakers have warned that the U.S. pullout from the region could give ISIS room to rebuild and send a message that the U.S. is willing to abandon close allies when the political winds change.

Esper told “Face the Nation” host Margaret Brennan that the remaining U.S. troops were caught between Turkish forces and the Syrian Democratic Forces (SDF), the main U.S. allies in the fight against ISIS. Esper said that he had spoken with Mr. Trump Saturday after discussions with the rest of the national security team. Mr. Trump, Esper said, then ordered a “deliberate withdrawal” of forces from northern Syria.

The move comes a week after Mr. Trump announced the repositioning of several dozen American troops embedded with Kurdish forces in northern Syria, opening the door for a Turkish offensive against the SDF.

Esper also told “Face the Nation” host Margaret Brennan that over the weekend, the U.S. had learned that the Turks “likely intend to extend their attack further south than originally planned, and to the west.” He added that “we also have learned in the last 24 hours that the … SDF are looking to cut a deal, if you will, with the Syrians and the Russians to counterattack against the Turks in the north.”

According to the United Nations, more than 100,000 internally displaced people are fleeing the violence.

Shortly after the initial pullback last week, Turkey began its onslaught, attacking the northern part of the country. On Saturday, the fourth day of the offensive, Turkish forces captured a key border town from the SDF. ISIS prisoners were also able to escape imprisonment when Turkish artillery hit a prison compound.