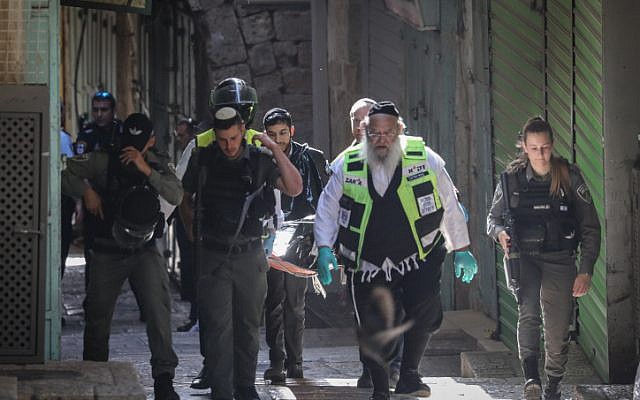 At least two people were injured, one of them seriously, in a stabbing attack in Jerusalem’s Old City on Friday morning, officials said.

“Around 6:20 a.m., the assailant entered through the Damascus Gate. He stabbed a man inside and began running from the scene. Along the way, he saw [a 16-year-old boy] and stabbed him as well,” police said.

The suspected terrorist, a 19-year-old Palestinian man from the West Bank, was shot dead by police officers at the scene, a police spokesperson said.

The terror attack occurred on the last Friday of the Muslim holy month of Ramadan, a period of heightened tensions.

Following the attack, police said they deployed additional troops around the Old City.

The man injured near the Damascus Gate sustained stab wounds to the neck and head, putting him in near-critical condition, medics said.

“I saw a man in his 40s lying on the stairs near the Damascus Gate barely conscious and with stab wounds to the upper body. I gave him first aid — stopping the bleeding — and he was quickly put into a Magen David Adom intensive care ambulance,” one of the medics said.

He was taken to Jerusalem’s Shaare Zedek Medical Center for treatment.