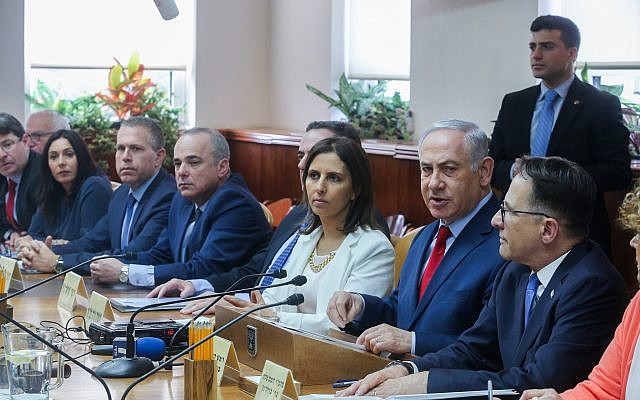 Prime Minister Benjamin Netanyahu told members of his cabinet this week that US President Donald Trump will likely walk away from the Iran nuclear deal this May, Channel 10 news reported Thursday.

Netanyahu reportedly made the remarks during the cabinet meeting on Sunday when he relayed the details of his meeting with Trump in Washington a week earlier.

“I believe Trump is very close to canceling the nuclear agreement,” Netanyahu reportedly told his ministers. “The president spoke in the presence of his staff and senior government officials when he told me that if there is no significant change, he’ll pull out of the Iran nuclear deal.”

According to a report in the Axios news website, Trump told the prime minister that he was demanding “significant changes” to the 2015 accord and vowed to walk away from the Obama-era accord unless the European countries fixed it. However, Trump said that so far, Germany, France, and the United Kingdom have only offered “cosmetic changes,” the website said, quoting Israeli officials.

The Trump administration has demanded the nuclear accord be amended to end its so-called sunset provisions, incorporate a ban on ballistic missile testing, and increase inspection access to Iran’s military sites.

The nuclear deal, reached in 2015 between Iran on one side and the US, UK, France, Russia, China, and Germany on the other, rolled back Tehran’s nuclear enrichment program in exchange for relief from punishing sanctions.

Trump has called the deal “disastrous” and vowed to pull out of it if it is not renegotiated, positions echoed by Pence in his speech.

Netanyahu said he warned US officials that, “buried within the Iran nuclear deal are many dangers to the world, including a specific danger of nuclearizing of the Middle East.”

This was highlighted Thursday when  Saudi Arabia’s crown prince warned in a US television interview that if Tehran got a nuclear weapon, his country would follow suit.