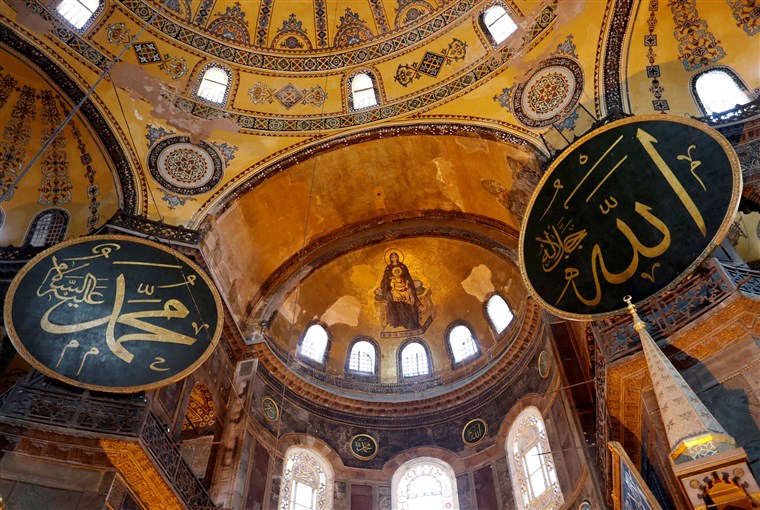 Turkish President Recep Tayyip Erdogan on Friday formally reconverted Istanbul’s sixth-century iconic Hagia Sophia into a mosque and declared it open to Muslim worship, hours after a high court annulled a 1934 decision that had turned it into a museum.

The decision to reconvert Hagia Sophia — a former cathedral that was turned into a mosque after Istanbul’s conquest by the Ottoman Empire and had served as a museum for 86 years — sparked deep dismay among Orthodox Christians.

But there was jubilation outside Hagia Sophia. Dozens of people who awaited the court’s ruling outside chanted “Allah is great!” when the news came out.

Turkey’s high administrative court threw its weight behind a petition brought by a religious group and annulled the 1934 Cabinet decision that turned the site into a museum. Within hours, Erdogan signed a decree handing over Hagia Sophia to Turkey’s Religious Affairs Presidency.

Erdogan has demanded that the the hugely symbolic world heritage site should be turned back into a mosque despite widespread international criticism, including from the United States and Orthodox Christian leaders. The move could also deepen tensions with neighboring Greece.

Cypriot Foreign Minister Nikos Christodoulides, a Greek Cypriot, posted on his official Twitter account that Cyprus “strongly condemns Turkey’s actions on Hagia Sophia in its effort to distract domestic opinion and calls on Turkey to respect its international obligations.”